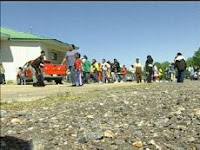 What did officials worry about when 60% of black students in Brinkley, Arkansas staged a boycott to protest the loss of black administrators and the loss of their dignity in school? They worried about AYP, of course. When 3,000 students stay home, will they listen? How about 300,000? How about 3 million? Will this be the beginning of the end for the New Eugenics?

BRINKLEY, Ark. -- School Superintendent Randy Byrd says students who are staying away from classrooms can still take the state's benchmark exams if they return by next Wednesday.

Hundreds of black students in the Brinkley School District continued a boycott for a second day Thursday, while school officials tried to maintain a normal routine for the remaining student body, Byrd said.About 300 of the 842-student district began the boycott Wednesday to call attention to racial problems in the schools, including a lack of black administrators next school year and how black students are treated, according to some black community leaders. Sixty percent of the student body is black.

As of late Thursday morning, the superintendent said he hadn't been contacted by anyone to discuss the students' concerns. He said school officials were focused on administering the Arkansas benchmark exams and other previously scheduled school work.