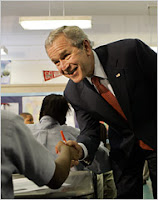 (Photo by Gerald Herbert, AP) The same day that the Deluder was in Harlem talking about universal support for NCLB and chatting up his voucher and charter school privatization plan, Jay Mathews was back home in D. C. pumping charters in WaPo and generally treating his readers, as always, like mushrooms, i. e., feeding them manure and keeping them in the dark. While Mathews contributed to the big story yesterday heralding the growth of charters in D. C., he contributed no references at all to the body of research that shows charters academically weaker or no better than the the public schools they would pretend to replace. Here is the bottom line on achievement from the 2003 Rand Study:

. . . our analysis suggests that charter schools generally have comparable or slightly lower test scores than do conventional public schools. Achievement, however, varies by type of charter school. Conversion schools that deliver their instruction in class- rooms had mixed results, with some scoring the same, higher, or lower than conventional public schools. Start-up schools using classroom instruction had slightly higher test scores in everything but elementary math, where the scores are slightly lower. Conversion or start-up schools that deliver at least a portion of their instruction outside the classroom, also referred to as nonclassroom-based schools, had lower test scores across the board (Summary, p. xxii).

The 2002 AFT study found essentially the same results in terms of achievement. They also turned up these disturbing facts:
In 2004 AFT released another study, "Charter School Achievement on the 2003 National Assessment of Educational Progress, based on NAEP data that ED had attempted to keep hush-hush. This is from Education Week, 9/01/04:

In 2003, for the first time, federal officials collected data on a nationally representative sample of 167 such schools [charter schools] as part of that assessment. They put the scores online in November, along with the regular state-by-state results.

But the Education Department never advertised the figures’ availability. In reports to the national board that sets policy for NAEP, officials said they planned instead to do a more finely grained analysis of the data and publish the findings in January 2004—a date that has since been moved to the end of this year.

The delay prompted union analysts to mine the data themselves. They found that 4th graders attending charter schools performed about half a year behind students in other public schools in reading and mathematics. In 8th grade, charter school students trailed in math, but for reading, the differences were not statistically significant.

Those patterns remained when researchers adjusted the numbers to account for the higher proportions of poor students who attend charter schools and for the fact that the schools are clumped in inner cities, where achievement is generally lower.

Students in charters and regular public schools scored about the same, however, after researchers controlled for differences in the racial makeups of the schools. Likewise, achievement gaps between poor students and their better-off peers were wide in both charter and traditional public schools, the report says.

And let's not forget the Lubienskis' study published in 2006 by the University of Illinois at Champaign-Urbana and the National Center for the Study of Privatization in Education at Columbia University. This study used NAEP data to examine public school math performance in comparison to religious schools, non-sectarian private schools, and charter schools: