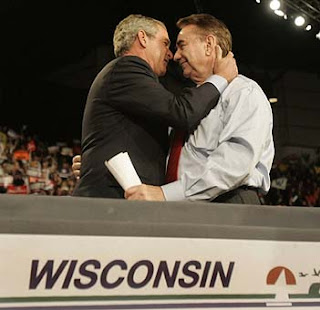 If it is hard to imagine a president named Tommy, it is harder to imagine one named Tommy Thompson, the same Tommy who so recently co-chaired the so-objective Aspen Commission on NCLB that delivered up something that looks like a Marc Tucker version of NCLB on steroids. As representative of the praying wing of the Business Roundtable, he chose a voucher-funded Catholic school in Milwaukee to make his pitch for becoming our National Shepherd.

Two central blocks in his domestic platform: a national school voucher program and a "stronger" NCLB. I would guess he is going to need a miracle or two to go along with those prayers:

He has previously said he didn’t mind being "the dark horse candidate." On Wednesday, Thompson said Washington Republicans have "lost their way" by spending taxpayers money irresponsibly even as a "sagging" health care system threatens the economy. "They tried to spend like Democrats, and voters saw through the act," he said. He also put forward proposals to: -Create a nationwide school voucher program. -Create a health care system based on preventive medicine rather than curative. He said he wants to "use the private sector and public sector to require health insurance for all," but didn’t elaborate. -Modernize the health care administration by replacing patients’ charts in manila folders with a wallet-sized card containing the patient’s health information. He said it could cut the health care system’s bureaucracy in half. -Add a flat income tax option and allow families "to pay whichever amount is least." -Send U.S. doctors to "some of the most distraught places in the world" to create medical and educational diplomacy. "By doing so, we can begin to heal some of the wounds to our global neighbors," Thompson said. -Make No Child Left Behind stronger, although he didn’t offer details.