Speaking Out on NCLB 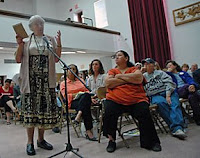 The federal government either needs to drastically retool the No Child Left Behind Act, a law regulating public school performance, or throw it out entirely, Rep. Raúl Grijalva said at a community hearing Saturday.

The 2001 law is up for reauthorization during this session of Congress, but Grijalva, D-Ariz., said he doesn't believe any action will be taken on the issue until the next session. Doing nothing will let the law continue as is, which he said he will not allow.

"This nation of ours is changing," Grijalva said. "As it changes, public education has always been the first responder to that change, integrating new people and new ideas into the fabric of this nation. And I would think that, as we go through this process of reauthorization, is to recommit ourselves to the role public schools play in that education process."

Ron Marx, dean of the College of Education, was also on the panel at Saturday's hearing.

The majority of those at the hearing wanted to change certain parts of the law or repeal it entirely.

Marx said he also thinks the law needs changing, and he believes Grijalva, who sits on the House committee responsible for reviewing No Child Left Behind, has proven that he will be a good ally for teachers.

"He will probably be the strongest voice in Congress," Marx said.

One of the problems many panelists said they have with the law is how it treats students who are still learning English.

Tim Hogan, a lawyer with the Arizona Center for Law in the Public Interest, said No Child Left Behind deserves some credit for shedding some light on how undeserved these students are, but he added the law needs some retooling.

Students should be given the tests in their native language, Hogan said.

Cathy Paredes, a sixth-grade teacher, said she has problems with the way the law views students using "snapshot" assessments instead of looking at overall progress.

Paredes pointed to one example in her experience, when a sixth-grade boy went from being at a third-grade to a fifth-grade reading level within a year but was still failed under the current testing system.

Pat Muller, a parent of four children in Tucson public schools, said she is distressed by the way the law's testing labels and categorizes children, including her third-grade son.

"He's quirky, he's funny, he's inquisitive, but he's a failure," Muller said. "This is a tragedy."

Lorraine Richardson, a Tucson parent, was the only member of the audience who spoke in favor of the law as it stands, saying standardized tests are a good indicator of which teachers and schools need improvement.

Hannah Glasston, a parent in the Tucson Unified School District, said she was most upset about a section of the law that requires high schools receiving federal money to allow military recruiters on campus.

"Schools are for education, not recruiting children for military service," Glasston said. "Especially during wartime."