Big Pharma to Team Up With Big Testing for Big Test Anxiety? 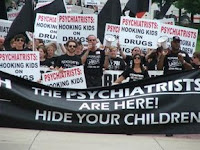 For years now parents, teachers, and health professionals have used Ritalin to drug children who would otherwise rebel against dead-end dictatorial classrooms. Children, in fact, have proven that they are just like adults in that, given the right drugs, they will sit in their chemical straitjackets and be totally involved in watching their shoes all day without protest.

Are you tired, then, of your children crying on test day, vomiting on test forms, getting nosebleeds, and generally wimping out? Get with the program, teachers and parents--ask your doctor today to put your kids on anti-depressants. That's right! A new study shows that Paxil, Zoloft, and the rest of the miracle depression cures are actually more reliable as anxiety reducers for children. Imagine that. And imagine, too, how your school's AYP is going to shoot up once our youngest and most nervous children are turned into calm, compliant zombies:

Among young patients with obsessive-compulsive disorders, 52 percent improved on antidepressants, compared to 32 percent who improved on dummy pills.

Effectiveness of the drugs was measured in the studies using widely accepted rating scales. The analysis appears in Wednesday's Journal of the American Medical Association.

The miracles of modern living!
at 5:29 PM