Bloomberg and No Child Left Without A Few Dirty Dollars 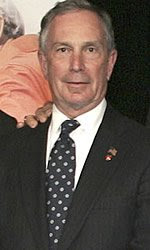 Fresh from an announced intention yesterday to initiate his Third World inspired pay-the-poor-to-accept-their-poverty plan, New York's own version of Ross Perot continued making headlines today by ending yet another fling with his latest political sweetheart, the GOP.

By declaring himself independent of either political party's principles, it would appear that Bloomberg is perfectly positioned to take advantage of his vast wealth to subject the nation to another independent run for the Presidency by another irrepressible, though less comedic, megalomaniac.

With his open plans to pay teachers for test scores and to pay students for test scores, one must wonder if he has the same offer in mind for '08 voters. If the White House can be bought, Bloomberg, like Perot before him, is another one who can afford it.
at 3:32 PM