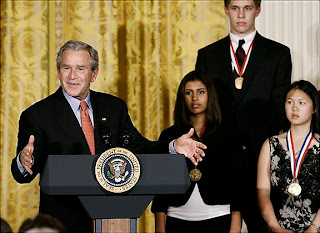 When Bush brought into the White House a top group of American high school scholars for a PR event to pump NCLB, he couldn't have known that he was about to be handed a hand-written plea signed by 50 of them to end his torture policy. The Bush response? To shift from Decider to Denier, of course. (Photo by Applewhite, AP):

WASHINGTON -- President Bush was presented with a letter Monday signed by 50 high school seniors in the Presidential Scholars program urging a halt to "violations of the human rights" of terror suspects held by the United States.

The White House said Bush had not expected the letter but took a moment to read it and talk with a young woman who handed it to him.

"The president enjoyed a visit with the students, accepted the letter and upon reading it let the student know that the United States does not torture and that we value human rights," deputy press secretary Dana Perino said.

The students had been invited to the East Room to hear the president speak about his effort to win congressional reauthorization of his education law known as No Child Left Behind.

The handwritten letter said the students "believe we have a responsibility to voice our convictions."

"We do not want America to represent torture. We urge you to do all in your power to stop violations of the human rights of detainees, to cease illegal renditions, and to apply the Geneva Convention to all detainees, including those designated enemy combatants," the letter said.

The designation as a Presidential Scholar is one of the nation's highest honors for graduating high school students. Each year the program selects one male and one female student from each state, the District of Columbia, Puerto Rico, Americans living abroad, 15 at-large students, and up to 20 students in the arts on the basis of outstanding scholarship, service, leadership and creativity.

The scholars travel to Washington each June for seminars, lectures and workshops with government officials, elected representatives and others.