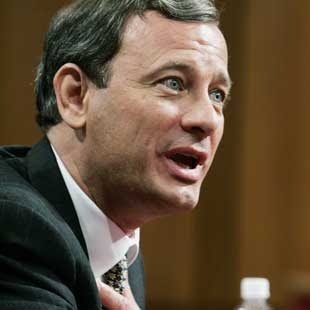 More analysis from the NYTimes:

. . . . Writing for the other four justices in the majority, Chief Justice Roberts took a harder line. In an unusual effort to cement his interpretation of Brown, he quoted from the transcript of the 1952 argument in the case.

“We have one fundamental contention,” a lawyer for the schoolchildren, Robert L. Carter, had told the court more than a half-century ago. “No state has any authority under the equal protection clause of the Fourteenth Amendment to use race as a factor in affording educational opportunities among its citizens.”

Chief Justice Roberts added yesterday, “There is no ambiguity in that statement.”

But the man who made that statement, now a 90-year-old senior federal judge in Manhattan, disputed the chief justice’s characterization in an interview yesterday.

“All that race was used for at that point in time was to deny equal opportunity to black people,” Judge Carter said of the 1950s. “It’s to stand that argument on its head to use race the way they use is now.”

Jack Greenberg, who worked on the Brown case for the plaintiffs and is now a law professor at Columbia, called the chief justice’s interpretation “preposterous.”

“The plaintiffs in Brown were concerned with the marginalization and subjugation of black people,” Professor Greenberg said. “They said you can’t consider race, but that’s how race was being used.”

“It’s dirty pool,” said Mr. Coleman, a Washington lawyer who served as secretary of transportation in the Ford administration, “to say that the people Brown was supposed to protect are the people it’s now not going to protect.”

But Roger Clegg, the president and general counsel of the Center for Equal Opportunity, a research group in the Washington area that supports colorblind government policies, disagreed, saying the majority honored history in yesterday’s decision.

“There is no question but that the principle of Brown is that a child’s skin color should not determine what school he or she should be assigned to,” Mr. Clegg said.

Justice John Paul Stevens, in dissent, said Chief Justice Roberts’s discussion of Brown “rewrites the history of one of this court’s most important decisions.” Justice Stephen G. Breyer, also dissenting, said the opinion “undermines Brown’s promise of integrated primary and secondary education” and “threatens to substitute for present calm a disruptive round of race-related litigation.”

Professor Greenberg said he was also wary of the reaction to yesterday’s decision. “Following Brown, there was massive resistance” that lasted some 15 years, he said. “This is essentially the rebirth of massive resistance in more acceptable form.”

Mr. Clegg, by contrast, said the decision’s practical consequences should be minimal. “Kennedy does leave the door open to some degree of consideration of race,” he said, “but it’s not very clear what that would be.”

As a consequence, Mr. Clegg said, most prudent school districts would shy from any use of race in assigning students for fear of costly and disruptive litigation.

Professor Greenberg suggested that more than law was at play in yesterday’s decision.

“You can’t really say that five justices are so smart that they can read the law and precedents and four others can’t,” he said. “Something else is going on.”