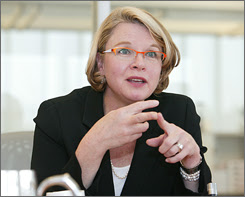 (Photo Leslie Smith, USA Today). With immigration legislation dead (again), and with the majority of the American people disapproving of the NCLB debacle, the Bushies are already trying to make nice in hopes of salvaging something that might leave the Decider with a legacy other than corruption, incompetence, and greed. Nice try, Maggie, but---write Congress and urge them to say, NO THANKS!! We can do better than to give in to the privatization of the poor schools! We need a plan to make them better, not to turn them over to corporations and churches. From USA Today:

U.S. Education Secretary Margaret Spellings on Wednesday proposed "a more nuanced" way of evaluating schools under President Bush's No Child Left Behind school reform law — one that would differentiate between schools that are close to meeting state math, reading and science standards and those that are "chronic, chronic underperformers."

Under the proposed change, public schools with just a few struggling students could help students without being labeled underperforming. In the bargain, they'd avoid sanctions that can include firing staff, privatizing or even closing their doors.

The law currently doesn't differentiate between the two. It breaks down schools' test scores by at least 36 categories, and if even one group of students — for instance, Hispanic or disabled students — doesn't improve, the entire school misses its "adequate yearly progress" goal.

That has been a major source of heartburn for educators. Recent figures show that about 2,300 of the nation's 90,000 public schools are being "restructured" under the law. That number will likely grow as more students miss progress goals.

The change, which Spellings floated during an interview with USA TODAY's editorial board, could quiet critics and help make No Child Left Behind more palatable as Congress prepares to reauthorize it. Spellings' spokeswoman, Katherine McLane, says Spellings has discussed the proposal with lawmakers.

The law requires schools that get federal money to test about half of their students annually in math, reading and science. If even one group doesn't improve, the school must offer all students free transfers to another public school; after another year, it must offer free tutoring. After five years, states can restaff schools, reopen them as privately managed charter schools or close them. In 2004, 41% of schools narrowly missed their goals.

Under the new proposal, schools that miss the mark because of just one or two groups could limit tutoring and transfers to these students — and avoid other sanctions.

Several education groups have suggested such a change, but Spellings hasn't discussed it in detail until now. Mike Casserly of the Council of the Great City Schools has proposed a similar change. He says it makes sense: "The strategies you use to address one set of schools ought to be different from the strategies that you use to address another."

Mary Kusler, a lobbyist for the American Association of School Administrators, welcomed the idea: "We are delighted to see that the secretary recognizes the need for a graduated accountability system, where all schools and school districts are not considered the same."

But Rosemarie Young, principal of Watson Lane Elementary School in Louisville, says the law still usurps states' roles in education and mandates solutions that may not fit all schools: "I'm just really cautious about broad strokes."