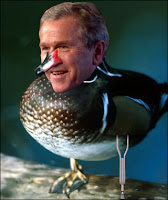 Will Bush passively-aggressively pursue NCLB reauthorization the same way he did the Immigration Bill? Bruce Fuller has this op-ed in yesterday's SF Chronicle on the prospects for federal education legislation this summer:

No Child Left Behind lowers the bar on school reform

President Bush seems a bit frantic as he campaigns for swift renewal of the No Child Left Behind Act, eager to salvage a late-inning win on the domestic policy front. He recently dropped into a Harlem charter school by helicopter, urging the Congress to pass No Child 2.0, no questions asked. Bush's education secretary, Margaret Spellings, pitched pithy remedies on a satirical news show. Washington simply needs "to expect more of our kids," Spellings said to the incredulous host, Jon Stewart.

But despite the Bush administration's orchestrated theatrics, the bipartisan coalition that crafted the original No Child law in 2001 is splintering badly, an unsettling development for those who count on Washington to help equalize educational opportunity in America. The first real test comes this month when Sen. Edward Kennedy -- Bush's odd bedfellow on both education and immigration reform -- intends to rally his congressional committee to move forward No Child's 1,100-page bundle of centralized school reforms. But sharp criticism is growing louder and from unexpected corners.

Speaking before thousands of cheering teachers in Washington last month, Sen. Hillary Clinton, D-N.Y., agreed that federal activism is required to boost the schools, "but not the kind of accountability that the NCLB law has imposed. The tests have become the curriculum instead of the other way around."

Former President Bill Clinton then sharpened the attack on No Child's holy grail -- standardized testing -- speaking to the nation's local school boards in San Francisco. "You don't need to test every child, every year," he said. A nationwide poll out late last month revealed that just more than two-thirds of all parents with school-age children believe that No Child should be rewritten or simply killed by the Congress.

Still, Bush insists that "the No Child Left Behind Act is working," as he proclaimed during his New York visit, running counter to the evidence.

Federal officials track children's learning curves in reading and math in each of three grade levels. Since No Child was approved, just one of these six trend lines has inched upward: fourth-grade math. The other five plots have gone flat or simply fallen. Progress in narrowing achievement gaps also has stalled, after closing markedly in the 1990s.

California students continue to inch upward within elementary schools. But Sacramento officials -- feeling enormous and unrealistic pressure to move all pupils toward proficiency under No Child -- tinker with state tests. After the state's third-grade scores failed to rise, test designers were nudged to make the questions a bit easier.

The aging Democratic bulls, including Kennedy and House Education Committee chair, U.S. Rep. George Miller of Martinez, risk perpetuating a costly and disappointing schools policy if they jump at the chance to cut a deal with Bush while failing to confront No Child's deep flaws.

Yearly exams given to every student are not essential in gauging how schools or student subgroups are performing over time. Federal monitoring of achievement gaps should continue, but it doesn't necessitate the huge chunks of time spent on test preparation that No Child now requires. Most surreal, No Child has pushed many states to lower, not raise, the bar that defines whether students test at "proficient" levels, given Washington's wishful mandate for universal proficiency.

Many states in response have simply lowered the hurdle that defines proficient student achievement. Texas claims that 79 percent of its fourth-graders are proficient readers; in California, where the bar is set higher, just 46 percent of all students are deemed proficient. In turn, Washington declares more schools as failing, because smaller shares of pupils clear the bar in states like California that set high standards.

States are adapting to Byzantine mandates from Washington. But governors and state school officials also game the system to create the illusion of rising achievement. So, its important to fix No Child in ways that retain a forceful yet surgical federal role. We certainly need a single benchmark for tracking student achievement over time.

Another monumental challenge facing the Congress is how to help states attract able and motivating teachers to work in flagging schools. But irrationality prevails again in No Child. Washington only credits schools for lifting students over the proficiency bar. This penalizes poor children -- and those who teach them -- who have much farther to climb to clear the hurdle than kids in better-off communities. Inner-city teachers quickly see their schools being slammed for being guilty on one count: trying to serve poor children.

Congressional Democrats may opt this summer for a middle ground, legislating a new effort to recruit and reward high-quality teachers while slowing down to judiciously work through the weaknesses of the larger No Child law. Such teacher legislation could finance crisp incentives to attract and retain the best teachers in urban schools. What's key for congressional Democrats is to avoid cutting an expedient deal with Bush. Instead, the Congress might first pass bipartisan legislation to enrich the teacher workforce, then move carefully to shape a federal role that truly lifts the schools.