R.I.P. Brown vs. Board of Education 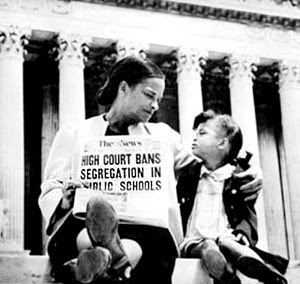 Over 50 years ago the the Supreme Court ruled 9-0 that separate schools are inherently unequal. Today in the cruelest of ironies, desegregation plans in Louisville and Seattle schools have been struck down by conservatives in a 5-4 vote by the Court.

This comes as I listen to the slithering chancellor, Joel Klein, rationalize the continuation of apartheid schools in New York City. Thurgood Marshall must be turning in his grave today.

The rulings in cases affecting schools in Louisville, Ky., and Seattle leave public school systems with a limited arsenal to maintain racial diversity.

The court split, 5-4, with Chief Justice John Roberts announcing the court's judgment. Justice Stephen Breyer wrote a dissent that was joined by the court's other three liberals.

Justice Anthony Kennedy wrote a concurring opinion in which he said race may be a component of school district plans designed to achieve diversity.

He agreed with Roberts that the plans in Louisville and Seattle went too far. He said, however, that to the extent that Roberts' opinion could be interpreted as foreclosing the use of race in any circumstance, ''I disagree with that reasoning.''

The two school systems in Thursday's decisions employ slightly different methods of taking students' race into account when determining which school they would attend.

Federal appeals courts had upheld both plans after some parents sued. The Bush administration the parents' side, arguing that racial diversity is a noble goal but can be sought only through race-neutral means.

Louisville's schools spent 25 years under a court order to eliminate the effects of state-sponsored segregation. After a federal judge freed the Jefferson County, Ky., school board, which encompasses Louisville, from his supervision, the board decided to keep much of the court-ordered plan in place to prevent schools from re-segregating.

The lawyer for the Louisville system called the plan a success story that enjoys broad community support, including among parents of white and black students.

The Seattle school district said it used race as one among many factors, relied on it only in some instances and then only at the end of a lengthy process in allocating students among the city's high schools. Seattle suspended its program after parents sued.

The opinion was the first on the divisive issue since 2003, when a 5-4 ruling upheld the limited consideration of race in college admissions to attain a diverse student body. Since then, Justice Sandra Day O'Connor, who approved of the limited use of race, retired. Her replacement, Justice Samuel Alito was in the majority that struck down the school system plans in Kentucky and Washington.

Affirmative action has to be the next big target for the segregationists, now returned to power.
at 11:05 AM