A Day of Shame 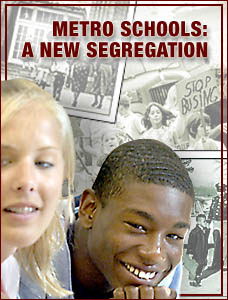 Comments in the NY Times by dissenting justices in today's Supreme Court reauthorization of segregation:

. . . The four dissenters wrote, in effect, that the majority was standing history on its head. Justice Stephen G. Breyer said that today’s result “threatens to substitute for present calm a disruptive round of race-related litigation, and it undermines Brown’s promise of integrated primary and secondary education that local communities have sought to make a reality.”

“This cannot be justified in the name of the Equal Protection Clause,” Justice Breyer went on, alluding to the Fourteenth Amendment to the Constitution, which bars states from denying people “the equal protection of the laws.”

Today’s ruling threatens the promise laid out in the 1954 Brown decision, Justice Breyer lamented. “This is a decision that the court and the nation will come to regret,” he wrote.

Justice Breyer’s dissent was joined by Justices David H. Souter, Ruth Bader Ginsburg and John Paul Stevens, the tribunal’s longest-serving member, who wrote a separate dissent that was remarkable for its feeling.

“While I join Justice Breyer’s eloquent and unanswerable dissent in its entirety, it is appropriate to add these words,” Justice Stevens wrote. “There is a cruel irony in the chief justice’s reliance on our decision in Brown vs. Board of Education.”

Today’s ruling breaks faith with the 1954 ruling, Justice Stevens asserted. “It is my firm conviction that no member of the court that I joined in 1975 would have agreed with today’s decision,” he wrote. . . .

Email ThisBlogThis!Share to TwitterShare to FacebookShare to Pinterest
Labels: segregation