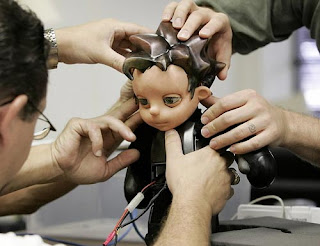 Look at those cute little frubber cheeks and those big sad plastic eyes. What's wrong, Zeno--did your friend fail his high-stakes test today? Give him a few encouraging words, something to help him score higher next year when he gets another chance to move on to the next grade.

Robot boy companions for robotic children--what could be more perfect! From the South Florida Sun-Sentinel:

David Hanson has two little Zenos to care for these days. There's his 18-month-old son Zeno, who prattles and smiles as he bounds through his father's cramped office. Then there's the robotic Zeno. It can't speak or walk yet, but has blinking eyes that can track people and a face that captivates with a range of expressions.

At 17 inches tall and 6 pounds, the artificial Zeno is the culmination of five years of work by Hanson and a small group of engineers, designers and programmers at his company, Hanson Robotics. They believe there's an emerging business in the design and sale of lifelike robotic companions, or social robots. And they'll be showing off the robot boy to students in grades 3-12 at the Wired NextFest technology conference Thursday in Los Angeles.

Unlike clearly artificial robotic toys, Hanson says he envisions Zeno as an interactive learning companion, a synthetic pal who can engage in conversation and convey human emotion through a face made of a skin-like, patented material Hanson calls frubber.

"It's a representation of robotics as a character animation medium, one that is intelligent," Hanson beams. "It sees you and recognizes your face. It learns your name and can build a relationship with you."

It's no coincidence if the whole concept sounds like a science-fiction movie.

Hanson said he was inspired by, and is aiming for, the same sort of realism found in the book "Supertoys Last All Summer Long," by Brian Aldiss. Aldiss' story of troubled robot boy David and his quest for the love of his flesh-and-blood parents was the source material for Steven Spielberg's film "Artificial Intelligence: AI."