Changing RTTT Rules in the Middle of the Race 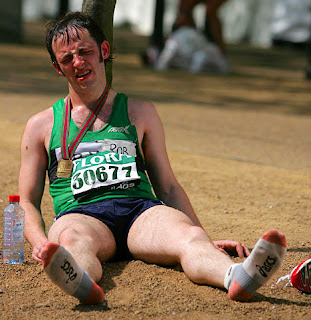 At the beginning of the first leg of RTTT, there were forty state entrants. Some states had changed laws on charter schools and teacher evaluations and constant surveillance data systems in order to run with the elites. Entrants spent millions in staff time to put together race plans they thought would get them part of the booty piled at the finish line for all to see.

Well, the first heat is finished and there were only two qualifiers. Not only that, but now that the state laws have been altered to open the door to the school deformation that Gates and Broad demanded to be considered among the elites, the big pot of gold for the winners has suddenly shrunk. Many previously enthused racers are thinking of pulling out. Is 0.25% of the annual state budget really enough money to make states dismantle the teaching profession, fire teachers, and impose resegregated charter schools?

One thing we do know: If any entrants remain for the Fall heat, the winners will be paraded before the cameras just before the Fall elections. The Republocrats will need all the PR they can get.

From Sam Dillon at the NYTimes:

. . . .Colorado, which had hoped to win $377 million, ended in 14th place. Now Mr. Ritter says the scoring by anonymous judges seemed inscrutable, some Coloradans view the contest as federal intrusion and the governor has not decided whether to reapply for the second round.

“It was like the Olympic Games, and we were an American skater with a Soviet judge from the 1980s,” Mr. Ritter said.

Colorado is not the only state where the initial results of the Obama administration’s signature school improvement initiative, known as Race to the Top, have left a sour taste. Many states are questioning the criteria by which winners were chosen, wondering why there were only two that won and criticizing a last-minute cap on future awards.

Besides Colorado, a string of other states — including Arizona, California, Nebraska, South Carolina and South Dakota — say they have not yet decided whether to keep participating.

“There’s a serious conversation going on here about whether it makes sense to put all that time and effort in again to reapply,” said Rick Miller, who as deputy schools superintendent led California’s first-round Race to the Top effort. He has since left state government.

Officials from several states criticized the scoring of the contest, which favored states able to gain support from 100 percent of school districts and local teachers’ unions for Obama administration objectives like expanding charter schools, reworking teacher evaluation systems and turning around low-performing schools.

A new rule capping award money, which is to be spent over four years, is causing states to waver. California, which requested $1 billion, can now only hope to win $700 million. Louisiana, which asked for $314 million, is now capped at $175 million, as is Colorado.

South Carolina, which hoped to win $300 million, came in sixth and is now capped at $175 million.

“That’s a lot of money, and we need it,” said the state’s superintendent of education, Jim Rex. “But spread it over four years, with all the federal expectations that come with it, and you have to ask whether you have the time and capacity to gear up again for the arduous work of filing a new proposal. We’re still weighing that.”

Florida has already decided to reapply, said Eric Smith, the state’s education commissioner. But because the state built its proposal around a $1.1 billion award and its new limit is $700 million, Florida will have to rethink its plan, he said.

“It’s a pretty significant reduction,” Mr. Smith said. Delaware’s $100 million prize gave that state $807 for each of its 124,000 students, Mr. Smith said. With the new cap, Florida can aspire to receive only $266 for each student, he said.

In California, Gov. Arnold Schwarzenegger fought hard to help win passage of several new education laws favored by Mr. Duncan, but the state received little or no credit for those victories in the scoring, said Kathy Gaither, the state’s undersecretary of education.

“These reforms that were so difficult, politically, didn’t generate any points,” she said. “There was just no room in the application or the scoring rubric for them.”

During a conference call on Thursday, representatives from 45 states questioned Ms. Weiss about the competition, including the scoring system, in which five reviewers read each state’s proposal, allotting points under a 500-point rubric, before scores were averaged.

One reviewer scored Michigan’s application far lower than did four others, prompting Michigan’s schools superintendent, Michael P. Flanagan, to also allude during the call to Soviet-style Olympic scorers — as did Governor Ritter.

Email ThisBlogThis!Share to TwitterShare to FacebookShare to Pinterest
Labels: RTTT