Waltons and Broad to DC Schools: No Rhee, No Funding

You might say that the attempted corporate coercion of public institutions has just been kicked up a notch. If DC teachers are stupid enough to approve the contract put together for them by Walmart lawyers with its $65 million in corporate sweetener, then they are stuck with Broom Michelle for as long as the oligarchs want her as their boardroom conduit. Simply put: A vote for the contract is a vote to keep Rhee at least for 2 more years and the oligarchs in control.

From Bill Turque at WaPo:


Private foundations pledging $64.5 million for raises and bonuses in the District's proposed contract with the Washington Teachers' Union have attached a series of conditions to the grants, including the right to reconsider their support if there is a change in the leadership of the D.C. school system.

The leadership condition, set by the Walton Family Foundation, the Robertson Foundation, the Laura and John Arnold Foundation and the Broad Foundation, makes it clear that they could withdraw their financial support if Chancellor Michelle A. Rhee leaves or is fired through the funding agreement's expiration in 2012.

"Implementing this contract will require significant support and leadership from DCPS' executive leadership," wrote Buddy D. Philpot, executive director of the Walton Family Foundation, in a March 17 letter to the D.C. Public Education Fund, the nonprofit group that coordinates private donations to the school system. "As such, the Foundation reserves the right to discontinue support for this initiative if there is a material change in DCPS' leadership."

Walton is the largest single donor to the contract, promising $25 million. Robertson has pledged $19.5 million; Arnold and Broad have pledged $10 million each.. . . . 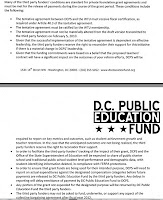