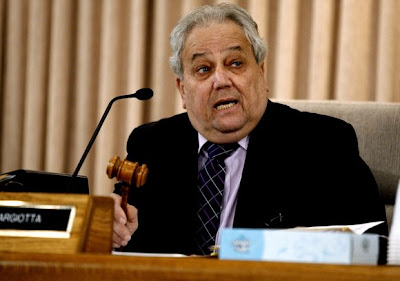 When 95 percent of the voters stayed home in Wake County's school board election last fall, they could not have imagined what a civics lesson they were about to receive--the hard way. The newly elected Gang of Five, led by the morbidly stupid Ron Margiotta, is hellbent on unraveling an elaborate and diverse social quilt that took 35 years to piece together among Wake County schools.

If Margiotta knows more about private schools than he does about public ones, it is because he was serving on the Board of his patron's private school long before he was elected to his current office. As for Margiotta's full-time mouthpiece, John Tedesco, his views represent those of an unrepentant and fatuous fool schooled by too many years of talk radio. From the NewsObserver.com:

And board member John Tedesco, a chief architect of the community schools approach that won voters over last year, says he would support a tax break to help families afford private schools if their needs are better served that way.

Triangle businessman Bob Luddy, the largest donor to the ruling majority on the Wake County school board, is the owner of three private schools. Margiotta serves on the board of one of them,Thales Academy in Apex, and says there's no conflict between the roles.

Luddy said in an interview Friday that the importance of traditional public schools will likely diminish over time when faced with competition from options including private and charter schools.

"As the county and city and state are more and more in debt, in public education there's very little except for [offerings] for the best and brightest," Luddy said.

"Honestly, I would like to see the public schools get involved with the charter schools and develop a better working relationship because of the way that they tend to be theme schools," Margiotta said.

What this means is that diversity and reassignments aren't the only topic separating members of the Wake County school board - there's also a philosophical divide on how central a role traditional public schools should play. For the school board's Republican-backed majority, approaches such as increasing the number of charter schools and granting tax credits to parents who send their children to private schools don't have the stigma they held under the mostly Democratic coalition that held sway for decades.

The faction that's skeptical of those approaches is now in the board minority. Former chairman Kevin Hill and others say the shift would take away resources from financially strapped public schools, could support exclusionary schools and raise church-and-state issues if parochial schools are included.

"What you should believe is our public education is as good as any out there, and if it's not, you are going to make it that way," she said.

In the background of the differences among board members is the role that Republican power brokers Luddy and Art Pope played in electing the new coalition. The two businessmen were the majority's largest donors when individual, party and PAC contributions are totaled. Luddy has backed taxpayer support for private schools, including tax credits, for more than a decade. And, he has opened a Wake Forest charter school, Franklin Academy, and three private schools, including Thales academies in Apex and Wake Forest.

In an interview Friday, Luddy said the survival of traditional public schools should be up to parents.

"It should be parental choice, and that could come in a number of forms," he said. "Charter schools have overall worked very well. I favor the tax credit - a credit whether the person pays taxes or not."

There should also be a mechanism for helping low-income families, Luddy said.

But both Pope and Luddy said they have had no conversation with any of the new board members about charter schools, vouchers, tax credits or related subjects. . . .

Email ThisBlogThis!Share to TwitterShare to FacebookShare to Pinterest
Labels: Wake County School Board