The "gold standard" for research that the corporate charter reformers like to point to involves comparisons of lottery winners and losers in charters that are over-subscribed, i.e., more student apply than are accepted.  These are the high flyers of the corporate charters, and the new study by the Feds compared lottery winners with lottery losers who attend public schools.  These new finding have just quashed any remaining delusion that these test prep chain gangs can serve as replacements for public education, for either high performers or low performers. It should be noted that the research team include some rabid supporters of charters, including Paul Hill. 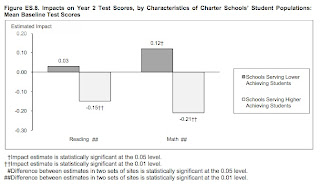 Below are the key findings from the Executive Summary:


Key findings from the evaluation include:
• On average, charter middle schools that hold lotteries are neither more nor less successful than traditional public schools in improving student achievement, behavior, and school progress. Participating schools had no significant impacts on math or reading test scores either a year or two years after students applied, other measures of academic progress (such as attendance or grade promotion), or student conduct within or outside of school. Being admitted to a study charter school did significantly and consistently improve both students’ and parents’ satisfaction with school.

significant negative effects on math test scores. Charter middle schools in large
urban areas also had significant positive impacts on math achievement compared to
negative impacts in other locales, although urbanicity was no longer an influential factor
once such characteristics as students’ demographics and income levels were controlled

• Some operational features of charter middle schools are associated with more

positive (or less negative) impacts on achievement. These features include smaller
enrollments and the use of ability grouping in math or English classes. Although impacts
differed for study charter schools with longer- versus shorter- hours of operations or
higher versus lower revenue per student, these features were no longer significant once
other school and student characteristics were controlled for. We found no statistically
significant relationships between achievement impacts and the charter schools’ policy
environment, including the extent of its decision-making autonomy, the type of
authorizer and how the authorizer held the school accountable, and whether it was
operated by a private organization.
at 7:06 PM