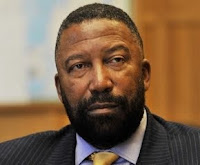 Broad Superintendent Academy alum, Bob Robert Bobb (Class of '05) was brought to Detroit to convert the public schools to a charter system built to segregate, contain, and psychologically modify the children of the poor.  In so doing, Bobb has become the Idi Amin of the BBC's hired guns, scheming to push aside a referendum that ended mayoral control of schools and making himself the Decider on which textbooks to buy.

The story from Michigan Public Radio:


DETROIT, MI (Michigan Radio) - Lawyers for the school board say Emergency Financial Manager Robert Bobb overstepped his authority when he waded into decisions about things like which textbooks to purchase, and which tests to administer.

School board attorney George Washington says Bobb cooperated with private foundations and charter school backers to draft a plan that calls for a mayoral takeover, and for replacing traditional schools with charter schools.

"Somebody who comes in as an emergency financial manager should not be scheming behind the back of the people to overturn a referendum that the people spoke on only two years ago," said Washington.

That referendum put an elected school board back in charge of Detroit Public Schools following a state takeover.

Bobb says the accusation and the lawsuit are diversions from the fact that he's working to turn around the troubled school district.

"I mean we have some tremendous challenges in front of us," Bobb said. "So every hour that we spend here, we're making it up by extending our day, or on the weekends."

Bobb says decisions about the district's finances and academics cannot be separated.

Hearings are scheduled to continue next week.