This could be big. Very big.  Particularly if every ed activist, teacher, and children's advocacy group gets involved to make this a national coalition-building and organizing conference topped off with a massive public demonstration for quality education.  From Children are more than test scores:


Welcome to the great American awakening 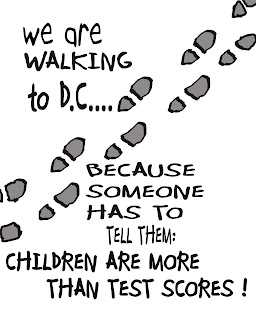 Last year I walked 400 miles in 40 days to protest the NCLB/RTTT policies. This year I am walking again, but I am bringing a few friends with me. I am not waiting for Superman, or some dynamic leader to fix public education. Instead I am walking to Washington DC again. What our public schools need most is an Awakening of the American People. An awakening is no simple task before us. The purpose of public schooling in America is enormously complex. Every once in a while, we as a people lose sight of the purpose of schooling in America. As a country we have not had a serious conversation around the purpose of education in over 150 years.

I intentionally use the term awakening because in many ways our great nation has been asleep in regards to the purpose of our public schools. The last time such a conversation was had was when the great Horace Mann fought for the very idea of a public education. He led our nations' noble fight to establish a free public school system. Horace Mann had a great vision called the "Common School Movement." It is his vision that eventually became an American awakening. It was his life's work. His vision focused on building a quality public school system that would educate not only the poor, but would also attract the sons and daughters of the very wealthy. His vision was driven by equality. Indeed the yardstick for public education would eventually become equality. While it was never perfect, equality did become the legal measure of public schools in our great nation. We have a legal history that goes back over a hundred years attesting to this fact. Mann dreamed of a system that inspires the spirit of democracy and a sense of morality. Education was the very means of preserving our democracy. The leadership of his day, on the other hand - much like today, was less inspired by morality and democracy. They did however love the idea of a competitive workforce, (ironically not much has changed). In order to sell the idea of public schools Mann had to compromise, and sell both a competitive workforce and moral citizens. Some of us today refer to this as Horace's Great Compromise. In essence this is America's covenant with a free public education. Although it was a compromise, the moral yardstick of our public school system remained equality until the legislation of No Child Left Behind.


No Child Left Behind lacked any moral compass from the start. This law reduces equality to a test score. It assumes no federal responsibility in obtaining equality. This current education reform has discarded our yardstick of equality. Simply put, the one and only indicator to measure academic success under NCLB is the test score on a standardized measure. Astonishingly NCLB claims to focus on closing the achievement gap while effectively taking the focus off equity issues. It has shifted the focus to outcomes on standardized testing as public schooling savior. Policy makers, politicians, and many of our educational leadership no longer focus on issues of race, poverty, and those Savage Inequalities that Jonathon Kozal so effectively writes about. Standardized testing is seen as the means to end inequality. Policy makers point fingers of blame at parents, teachers, schools of education, even students themselves. In my mind the very weakness of NCLB reforms are driven by their fear that America is losing its economic edge in this global world. In their mind democracy and morality come second. Sadly in some circles it may even be seen as a hindrance.

We once again have the unique opportunity to revisit our public school covenant. This awakening will be driven by two questions:
First: Is the best sole measure of a child a standardized test score?

Second: Is the ability to compete in the workforce the most important outcome of our public schools?

If the answer is a resounding yes, then indeed all that matters is a test of basic academic skills in math, reading, and writing. Unequivocally, I believe that as Americans we expect so much more from our public schools. Morality matters to Americans. In particular it matters to the parents and caregivers of the children in our public schools. Character counts in America. Without a doubt the very principles of democracy matter a whole lot to the people of our great nation. NCLB has thrown the balance so far out of whack that the very fabric of our nation is in danger.

This awakening is so much more than NCLB. It is more than a simple test score, or even education reform. This awakening is about a covenant that has been broken. It must be fixed. In order to do this we need a movement that returns us to a conversation around our nation's public schooling covenant.

Some people naively think parents, teachers, and Americans in general are not ready for this kind of discussion. On the contrary, I believe this is what Americans are born to do. I plan on bringing this conversation to our people. I have great faith in Americans and their do the right thing attitude when push comes to shove. With NCLB push has come to shove. For this reason I walked 400 miles from Connecticut to Washington D.C. this past summer. It is why I am walking again next year. While my simple metaphor to begin this awakening was "Children Are More Than Test Scores" it really must be so much more. It must be a call to action. A call to reclaim our schools; reclaim our schools from fear. We need to return to Horace Mann's vision of purpose.

My walk ended this year on Labor Day on the campus of the American University. Those sitting at our presentation didn't want this to be the end. Instead our group of NCLB resisters said this is only the beginning. All of those present had followed my walk from Connecticut to D.C. (via the internet) since I started out in May. We knew we wanted to continue this conversation beyond test scores. So began our conversation around a balanced and fair assessment system. This will be a system that respects children, teachers, and local schools. This on-going conversation opens the door to the awakening. We as a group, parents, teachers, and academics, have been working hard on planning a series of actions against NCLB, (SOS's March/Teach-in July '11).

America and our public schools need every voice. We need to elevate this conversation to something more than the failure of NCLB. We must be reminded that public schools are at the heart of what makes us America. I think it is imperative to move congress, the senate, and the White House, but first of all we need to move the people of America. The rest will follow.

It is to the people of America I make this call, to the Mom's and the Dad's, the builders and the firefighters, the nurses and the teachers, you are our voice, our hope. I have always thought that each and every one of us can be the hope for each other. Together our voice is loud and clear, and only together can we move mountains.

I am not pessimistic these days. I am not fearful that the day is in danger of being lost. I am convinced this wakening is already happening. No congress, or senate, not even the president can stop this conversation now. We are beyond the tipping point. There is a choice, either get out of the way, or come ride our wave. I love the idea that every tidal wave has its origins in a single drop of rain. Are you part of the coming tidal wave? What is holding you back? Hold on this is going to be one heck of a ride. Teachers and parents come join us in Washington DC. It is your voice that is often missing in this extremely important discussion. Employees of public schools, the teachers and principals of the schools that we all cherish, are very vulnerable in all of this. They and their unions are the targets of so many of the current reformers. They can very easily be dismissed or moved, at the drop of a hat. You are unique. You can do something powerful by speaking up for someone who is crying inside. The teacher or principal that you've known forever may be too fearful to speak up. I call upon you all, especially grandparents, retired teachers and principals. You are the powerful potential.

Rather than tell people what to do, I prefer to say "Why not come join us in Washington DC this July 28th to July 31st, and become a pivotal part of the Save Our Schools Awakening." To connect with this, please join our group, Children are More than Test Scores.

Standing by those that stand right!
Jesse P. Turner