Confronting the Clinton cheerleaders with her racist record

“Hillary Clinton is not a Klanswoman, but she performs the same racial violence that white men do, just as many Klanswomen did less than a century ago. Thousands of black people continue to lose their lives because some white women still want to be as “badass” and powerful as the white men who silenced them in the home, held back their right to vote, and brutalized as many black people as they desired.” — Ahmad Greene-Hayes

The Clinton cheerleading that has been building up to a crescendo at Professor Ravitch's site reached a new nadir today. I suppose we will see a lot of this between now and November. It's hard to see people using the excuse of opposing one racist to support another racist, but that's what this election boils down to. Although I should avoid engaging those steeped in supporting neoliberalism, I couldn't avoid posting the following comments:

As horrifying as the prospect of Trump is, let's not fool ourselves into thinking that he is the only racist representing a major political party in this election. Indeed, the genteel, more insidious racism of his Democratic opponent is equally disconcerting. While Trump can't speak without uttering bigotry, are we supposed to ignore his opponent's racist slurs against Native Americans with her infamous "off the reservation" remark? Are we to excuse her vile "super-predators" speech where she says that "we have to bring them to heel" in reference to children of color? I understand her apologists excuse that kind of racist rhetoric, but any of us that live and breath social justice are in agreement with the distinguished Professor Michelle Alexander, who says, "Hillary Clinton" uses "racially coded rhetoric to cast black children as animals." And while Trump talks about border walls, Clinton proudly reminds us "I voted numerous times when I was a senator to spend money to build a barrier to try to prevent illegal immigrants from coming in…" Clinton and Trump's use of the racist term "illegal" is in itself bigoted and nativist. In fact, even the Associated Press stopped using the horrible phrase some time ago. We can discuss how terrible Trump's rhetoric is on issues of immigration, but Clinton has an actual record to scrutinize, and it is a record of the most vile bigotry in practice.

I'll stop here because I realize that speaking truth to power on this issue will do little more than evoke lesser evilism responses. No one will actually be able to defend Trump or Clinton's records on the issues I've raised, because they are indefensible. I'll be voting for the same feminist this November that I did in 2012 — her name is Dr. Jill Stein. Stein, by the way, has the best stances on education. She opposes charters and vouchers, opposes high-stakes standardized testing, stands with teachers, and called the Obama Administration out on its appointment of the doltish John King. It don't recall the candidates from the major parties ever taking such principled stands.

Like the sage Professor Keeanga-Yamahtta Taylor says: "Clinton will never be a lesser evil." 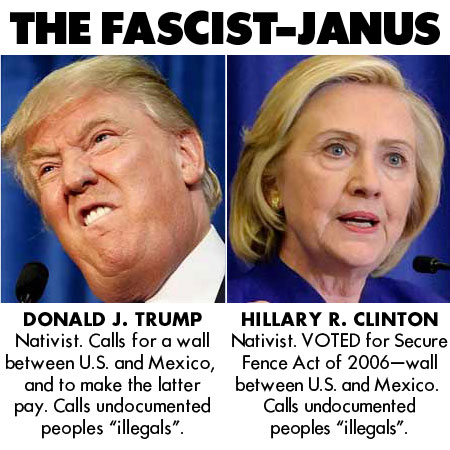