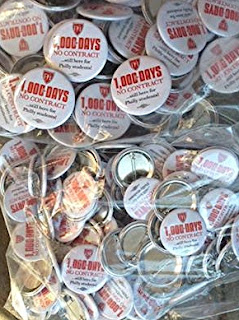 After Crossing the Rubicon

Having crossed the Rubicon in its turnover of Wister public school to a charter company despite its not being, by its own criteria, a “failing school”, the Philadelphia School Reform Commission (SRC) is embarked on an agenda to greatly expand the privatization of Philadelphia public schools.

At its May 26th Action Meeting, the SRC formally turned over Wister to Mastery Charters concluding the process begun at its January 21, 2016 Action Meeting when Wister was returned to turnaround status despite evidence it was not “a failing school”. At the same time, at the May 19th and May 26th Action Meetings, the SRC sought ways to get around the recommendations of its Charter Office that two ASPIRA and two Universal charters not be renewed despite consistent violations of their charter agreements and low academic performance at the schools.

The ASPIRA and Universal Nonrenewal Recommendation

For over a year, the Charter Office had been telling ASPIRA it was in violation of its charter. In a January 22, 2015 letter to ASPIRA, the Charter Office listed 17 conditions that ASPIRA, Inc. must meet for charter renewal, including overhaul of its board of trustees, its business practices and its oversight of its Stetson charter school. On August 23, 2013 reporter Daniel Denvir had reported ASPIRA owed millions to its four charters, but no one was checking its books. As previously, in December, 2014, ASPIRA rebuffed the attempt by the Charter Office to oversee its operations.

The vote for non-renewal of the two ASPIRA and two Universal charters was finally scheduled for the April 28, 2016. Shortly before, the head of the Charter Office expressed confidence that the vote on the non-renewals was proof that oversight of Renaissance charters was working.

However, at the April 28th meeting, the SRC voted to table the non-renewals for the four charters. The reason given by Commissioner Bill Green was that the SRC had to wait for a report of the City Controllers office that was investigating the charters.