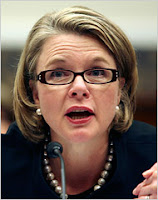 Yesterday our leading Education Embarrassment went before Congress to dodge and weave her way from any responsibility in the looting of federally-guaranteed student loans by companies whose former executives ran the loan programs at ED. Congressman Miller showed enough disdain, according to WaPo, to signal the Secretary may need more than "big girl panties" to save her posterior from being put out to pasture with Rod Paige, who is now doing ads for Randy Best, whose fortune the former Secretary helped secure during his tenure as Secretary.

Can you say, "needs improvement," Secretary Spellings? If the Department she runs were a public school, sanctions for failure would have already been shut it down and reopened as a charter macschool.

The Times has this summary evaluation by Miller:

“When I look at the whole body of evidence that has been amassed about both the student loan and Reading First programs, it is clear that — at a minimum — the Education Department’s oversight failures have been monumental,” he said.

And this from WaPo:

Education Secretary Margaret Spellings, facing aggressive questions about her department's oversight of the $85 billion-a-year student loan industry, offered a vigorous defense of her actions yesterday and called for a multi-agency effort to prevent corruption in the loan system.

"Federal student aid is crying out for reform," Spellings told the House education committee. "The system is redundant, it's byzantine and it's broken. In fact, it's often more difficult for students to get aid than it is for bad actors to game the system."

In a sometimes-tense hearing, Democratic lawmakers accused the Bush administration of failing to clamp down on conflicts of interest and various industry practices that have drawn criticism from Congress and attorneys general across the nation. The House voted this week to increase federal regulation of the loan business.

"The Education Department's oversight failures have been monumental," said Rep. George Miller (D-Calif.), chairman of the committee. "Was this simply laziness? Was it incompetence? Was it a deliberate decision to look the other way while these things happened? Or was it a failing more sinister than that?"

Miller disclosed at the hearing that the Justice Department is examining a controversial accounting loophole used by Nelnet, a Nebraska-based lending company, in an attempt to collect more than $1 billion in government subsidies. Spellings decided this year to halt the payments but allowed Nelnet to keep $278 million it had collected.

Ben Kiser, a Nelnet spokesman, said the company is "fully cooperating" with the Justice Department and remains "confident that there are no grounds for any action against Nelnet." The department is looking into potential civil fraud, according to a source who spoke only on the condition of anonymity because of the matter's sensitivity.

Spellings offered her fullest explanation yet of the decision to settle with Nelnet, saying she believed there was a significant chance that the company would have won if it had filed a lawsuit against the government to continue receiving payments.

But Miller, in one of several verbal sparring sessions with Spellings, said the explanation made little sense. "If it's such an easy case for them, why did they walk away from $1 billion?" he asked.

Spellings said the Bush administration has taken significant steps to regulate the student loan industry. She announced that a task force named to create rules forbidding gifts from lenders to universities had made its recommendations, which she pledged to implement.

One of the biggest areas of contention was the department's oversight of companies that offer private loans, a fast-growing section of the market. Spellings said she had the ability to regulate only federally guaranteed loans, but Miller insisted that she could have used her bully pulpit as secretary to stop controversial practices in the private loan business.

"Who was monitoring?" Miller asked. "Did they have blinders on?"

Spellings replied: "It was not a violation of the laws I'm charged with overseeing."