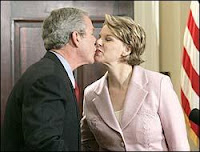 Salon has an nice piece on the end of the "gilded age for the loan industry."
A clip:

May. 28, 2007 | Secretary of Education Margaret Spellings sounded like a reformer when she testified on Capitol Hill earlier this month over recent revelations of waste, fraud and bribery in the $85 billion-a-year student loan industry.

"Federal student aid is crying out for reform," said Spellings, speaking before the House Committee on Education and Labor. "The system is redundant, it's Byzantine, and it's broken."

But education experts weren't buying it -- and neither were Democrats. Spellings glossed over the fact that the Department of Education, which she took over in 2005, had known since the start of the Bush administration about questionable financial practices and had only recently asked lenders to stop them. The committee's new Democratic chairman, California Rep. George Miller, whose attempt to stop the flow of cash had been thwarted while Republicans controlled Congress, rebuked Spellings for her inaction. Either she or her predecessor, Miller said, "could have stopped this hemorrhaging of money that [lenders] were not entitled to." For six years, there had been what one House staffer called a "Wild West atmosphere of no enforcement at the department," and it had cost taxpayers hundreds of millions of dollars.

From a 2001 internal Education Department memo warning the incoming Bush administration that lenders might be trying to improperly influence college financial aid offices, to a department whistle-blower, to numerous reports outlining a virtual hemorrhaging of the department's money, for nearly six years there have been signs pointing to something rotten in the state of the student loan industry. But time and time again, according to congressional staffers and Washington education experts, the department leadership and key members of Congress looked the other way.

"The day Bush was elected was the beginning of the gilded age for the loan industry," says Barmak Nassirian, of the American Association of Collegiate Registrars and Admissions Officers. .. .