In March we reported on a meeting we attended in Long Branch that was designed to scare the unwary public into believing that New Jersey high schools are going to hell in a handbasket and, therefore, in need of rescue by Achieve, Inc., the Business Roundtable and the U. S. Chamber of Commerce. Now a new meeting is coming up Wednesday in Maplewood, New Jersey. Here are some reasons for you to be there.
If this national and local effort were just a harmless PR campaign to divert attention away from the accelerating exportation of American jobs, this would not be such a big deal. But what is at stake is the soul, the heart, and the legs of American public education. Will public education continue to strive to serve the diverse educational needs of a democratic republic, or will public high schools become corporate training and testing camps for the 21st Century? Be assured--nothing less than the future of the public high school is at stake here. 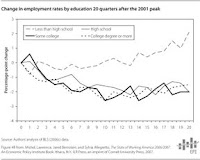 Some facts:
The chart at left (click it to enlarge) shows the type of job growth and job disappearance over the past 20 quarters since 2001, as more and more jobs get exported to cheaper foreign job markets. That line that spiking off the chart? Those are the most dynamic sources of American job growth--dead-end jobs requiring less than a high school education.

According to the U.S. Bureau of Labor Statistics, eight of the top 10 fastest-growing occupations through 2014 do not require a bachelor's degree.

The majority of those who are lucky enough to go to college will graduate with debt burdens to Nelnet and Sallie Mae that would choke a horse. Barbara Ehrenreich points out that this harsh reality makes for desperate, resume-padding job seekers who are willing to do anything their potential bosses may ask them to do:

Or maybe what attracts employers to college grads is the scent of desperation. Unless your parents are rich and doting, you will walk away from commencement with a debt averaging $20,000 and no health insurance. Employers can safely bet that you will not be a trouble-maker, a whistle-blower or any other form of non-"team-player." You will do anything. You will grovel.

So if you would like to join the effort to tell the real story behind this attempted hostile takeover of the American high school, be at Columbia High School this coming Wednesday evening.

To make it easy to get there, I have clipped this from the official website: