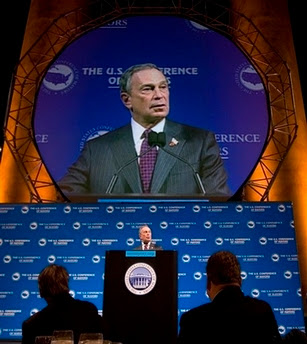 According to a new poll that, by the way, mirrors a number of attitudes expressed in the latest PDK poll, 2 out of 3 New Yorkers say Bloomberg has not improved education in the New York City.  A big clip from the NYTimes:


New Yorkers are broadly dissatisfied with the quality of their public schools, and most say the city’s school system has stagnated or declined since Mayor Michael R. Bloomberg took control of it nine years ago, according to a New York Times/CBS News poll.

Mr. Bloomberg has made improving the schools a focus of his mayoralty, seizing authority over the bureaucracy, doubling the budget and opening hundreds of additional, small schools. Still, even as his overall approval rating, 45 percent, is at a six-year low, considerably fewer residents — 34 percent — approve of how the mayor is handling education.

“What had been a signature issue for Bloomberg may not be the legacy issue he hoped it would be,” said Bruce M. Gyory, a political consultant and adjunct professor at the State University of New York at Albany.

In follow-up interviews, poll respondents expressed various reasons for their dissatisfaction, including frustration over the system of school choice, services for disabled children and the emphasis on standardized tests.

“Bloomberg treats the schools and the education system like a business,” said Liette Pedraza-Tucker, 41, a film editor from Brooklyn. “But schools aren’t a business. Kids need nurturing, not to be treated like adults.”

Robert Kemp, 74, a retired bank officer from Queens, said: “What they’re teaching is too narrowly focused. It’s all let’s pass tests; it’s not about turning out educated kids.”

City Hall played down the results. “The numbers we are focused on are the gains our students are making in the classroom, and by those measures, we have made historic progress,” said Julie Wood, a mayoral spokeswoman. “Graduation rates are at an all-time high and we are outpacing the rest of the state on test scores. But we have to keep raising the bar.”

Dissatisfaction with public schools in New York is longstanding. Through much of the 1990s, as well as in Mr. Bloomberg’s first years in office, few residents were satisfied, past New York Times/CBS News polls found.

As Mr. Bloomberg reorganized the system and poured money into it, satisfaction slowly grew. It appeared to peak in 2009, when nearly one-third of registered voters said they were satisfied with the schools, and 57 percent with Mr. Bloomberg’s handling of them, according to Quinnipiac University polls.

But in 2010, a recalibrating of state test scores sent the city’s soaring passing rates nearly back to 2003 levels. Then Mr. Bloomberg made what the public may have judged as his biggest gaffe, naming Cathleen P. Black, a publishing executive with no education experience, as the schools chancellor. Even though Ms. Black was dismissed in April after three months, the effects on public opinion linger, analysts said. Fewer people today approve of Mr. Bloomberg’s handling of education now than in his first years as mayor.

And Dennis M. Walcott, the longtime deputy mayor who replaced Ms. Black as chancellor, has not yet made a strong impression, with 53 percent of those polled having no opinion on his performance.

A year of political attacks on teachers and their unions nationally appeared not to have registered with New Yorkers. A quarter said they had a favorable opinion of the local teachers’ union, compared with 16 percent who had an unfavorable opinion. A majority did not express an opinion.

Among parents, 34 percent volunteered that teachers were the best thing about their child’s school, more than in 2004, when 22 percent said so. A plurality of parents said teacher quality was the most important thing to look at when choosing a school.

Crowding and class sizes, which are growing, ranked highest when parents were asked to name the worst thing about their schools, at 13 percent. It is an issue frequently mentioned by the teachers’ union and parents, but not City Hall.. . .