The Broad Prize for Corporate Domination Goes to Charlotte-Mecklenburg

That photogenic charlatan and former superintendent, Peter Gorman (Broad Class of '04) caused all sorts of grief for Charlotte educators, parents, and students before he was scooped up by Rupert Murdoch (Aaaargh!) to serve as one of Murdoch's chief edu-lackeys. Just in time, too, as Charlotte parents and teachers were ready last Spring to tar and feather Broad's man,  Gorman, for introducing 52 new tests to enable a new teacher evaluation scheme based on, what else, test scores:


Skeptical parents and adamant administrators are squaring off over a surge of new testing in Charlotte-Mecklenburg Schools, as teachers watch warily and brace for hours of new work.

Next week CMS will launch trial versions of 52 new tests, including an exam for kids as young as kindergarteners who must be tested one-on-one. The tests will be used to evaluate teachers, as the budget shrinks and officials prepare to lay off faculty.


In order to try to salvage the corporate reform schooling PR train wreck in Charlotte, Broad produced $3 million in pocket change to pay for the 52 tests, and three days ago the bare-knuckled philanthrocapitalist picked CMS as winner of the Broad Prize for their continued loyalty to corporate money.


The Broad Foundation has given CMS about $3 million to analyze data and test students, some of that with an eye to crafting the district's Pay for Performance plans.

Mark Anderson, a principal at Crown Point Elementary school, isn't so sure what he thinks about all that money, but he's proud of the district for taking the top prize.

"The pay for performance, well, that varies, but I'm just happy that $550,000 will be used to send kids to college. That's the most important thing to me," said Anderson.

The scholarships will range from $5,000 to $20,000 for needy seniors to help pay for college or trade school. All of the money must be awarded to this year's seniors.

CMS sent several administrators to the ceremony with the help of a grant from the local CD Spangler Foundation. Former Superintendent Peter Gorman was also there. He graduated from the Broad's superintendent training academy seven years ago.

With the search on for a new superintendent and school board elections in November, it's not clear what the district's direction will be. Critics say the Broad foundation and other private donors are trying to take local control away from public schools by influencing education leaders and rewarding certain policies.

Eli Broad, the wealthy businessman who founded the group, says he hopes this award will help convince the public that CMS is on the right course.

"I think if they look at the record and recognize they were chosen as the best district in all districts of urban America, that they'd want to continue with the successful policies they've had," says Broad.

The panel that chose CMS includes three former US education secretaries and the former president of the Service Employees International Union.. . . 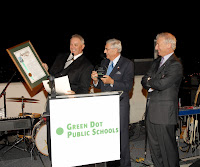 At left is Broad, Steve Barr, and the then-president of SEIU, Andy Stern, at a fundraiser for Green Dot Public Schools, Inc. in  2007
at 10:05 AM