If the Public Mattered to Arne and the Reform Schoolers, What Might They Learn?

Last week the 43rd annual PDK/Gallup Poll was published, and never in the history of the Poll has the concept of "a public" been more threatened by a virulent form of corporatism that seeks to replace democratic institutions with unregulated profiteering by educons schooled in the virtue of selfishness and the worship of wealth.

I have pulled some of the findings from the Poll and pasted them below, along with few comments (click on any chart to enlarge). 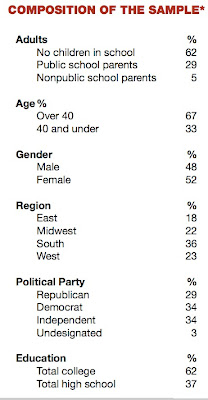 Notice above the makeup of the respondents: mostly conservative, mostly above 40, mostly without public school children of their own.  Where once PDK was keen on minority, urban, and rural representation in their poll, the corporate reform schoolers who now hold sway at what was once a great organization don't even bother, anymore. 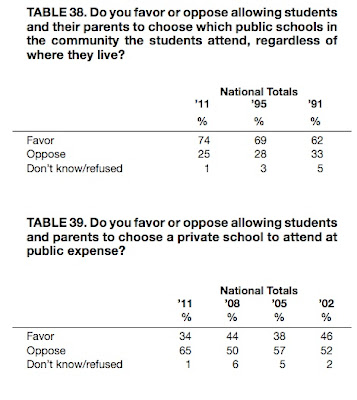 A couple of points here.  The American public supports public school choice, even if housing patterns will doubtless assure continued segregation unless we have an active Federal commitment to diversity in schooling, which in itself is a stopgap until such time as we have a societal commitment to end poverty in America.  With Gates, Broad, and the Waltons much more interested in segregative charters than integrative magnet schools, resegregation will continue unabated until educators and parents reclaim the public schools.

Point 2: By increasing numbers, the American public continues to oppose school vouchers, even as the corporate antiquarians and John Birchers continue to try to impose them. 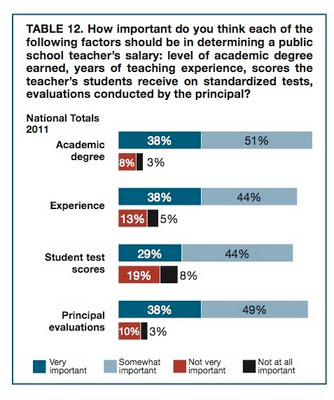 Despite the Business Roundtable's, i. e., Arne Duncan's fixation on making teacher evaluations and teacher pay subject to student test scores, Table 12 shows that the American public, even this conservative cross-section, sees student test scores the least important of four factors asked about. 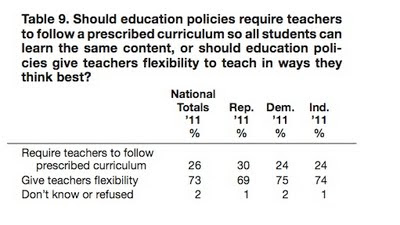 And, hey Arne, the American public in not interested in your lockdown national curriculum, whether Republican, Democratic, or Independent.  Please see above!! 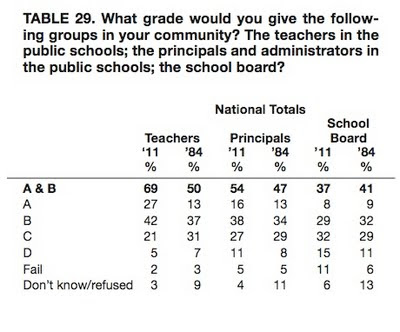 Despite the relentless corporate hammering of teachers in the corporate media (see below), the American public is not fooled, as the figures above indicate.  In fact, the percentage of the public giving teachers an "A" has more than doubled from 27 years ago. 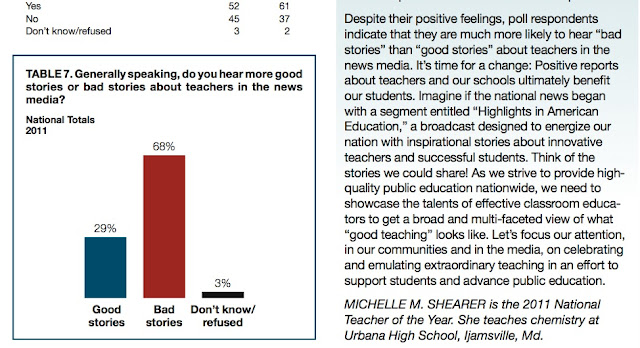 Just above, Table 26 does not surprise, given the large percentage of respondents who don't have children in public schools, but notice in Table 28 that the grading by parents who have children in public schools continues to go up, despite the corporate reform schooler policies aimed to crush them by making schools untenable test factories.  This represents nothing less than a remarkable example of persistence and hard work by educators determined to serve the needs of children in an era when it has never been so hard to be a teacher. 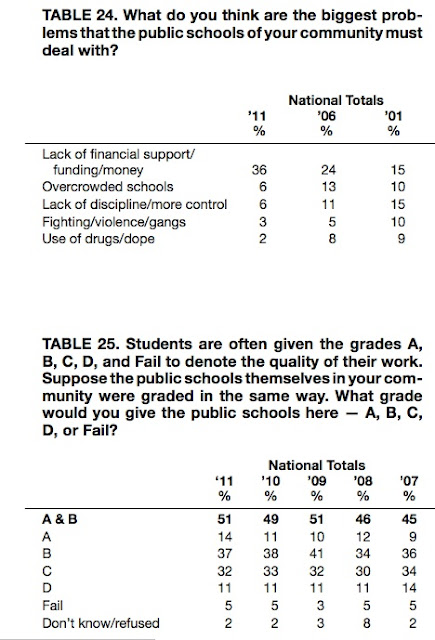 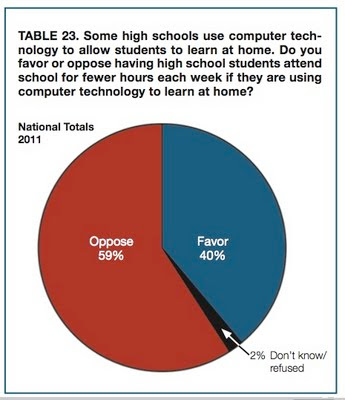 Finally, Table 23 shows clearly that the American public does not support the virtual ed vultures who see the solution to educating the poor as using 21st Century technology that mimics 19th Century parrot pedagogy.