Dr. Martin Seligman and his fellow psychological engineers are on a campaign to save the world by making it "happy," or at least to make sure that those who are not "happy" attain a level of "character" so as not to intrude on the well-deserved happiness of those who already have attained "authentic happiness."

Seligman has consulted the sages from Aristotle to the Zuni to come up a list of 24 common traits found among human civilizations, past and present, that would seem to constitute qualities that represent the individual and collective good of us humans.  From Paul Tough's NYTimes Magazine piece last Sunday:


The list included some we think of as traditional noble traits, like bravery, citizenship, fairness, wisdom and integrity; others that veer into the emotional realm, like love, humor, zest and appreciation of beauty; and still others that are more concerned with day-to-day human interactions: social intelligence (the ability to recognize interpersonal dynamics and adapt quickly to different social situations), kindness, self-regulation, gratitude.

Now pared down even more from Dr. Positivity's original list of 24 character traits is the final list adopted by KIPP, Inc. which translates "hope" as "optimism," changes "self-regulation" to "self-control," and uses "grit" for "persistence."

Now there is hardly any controversy to be generated from the Seligman and Peterson virtue list nor the abridged Tough list or even the Spartanized Feinberg and Levin list.  What will create hot debate and outrage, however, is that Seligman would engender these traits, virtues, qualities by devising interventions that essentially replace choice, reflection, and metacognition with behavioral-cognitive treatments.

In short, Seligman prefers a society that is psychologically engineered to be happy and productive to one that is ethically deliberative or, perhaps, one that is outraged that human civilization is in the process of being sacrificed for corporate profits.  How else can psychologists justify their existence to corporations that pay their bills if they do not have something that can benefit corporations?

Here is a sampling of instruments that Seligman's "authentic happiness" team is working to perfect.  You can actually help Dr. Seligman by filling out these questionnaires.  Thought that Myers-Briggs inventory was intrusive when you applied for that position?

KIPP's industrial strength school model for behaviorally neutering children is taking these parlor games one step further by devising a "gritty" curriculum for its imposition of self-control, gratitude, etc., and then assigning grades that would follow students just like their Algebra scores.  No doubt this new character testing will reap big benefits for KIPP's total compliance program.  Do you really think that you are going to get into Brown, young KIPPster, if you show little gratitude for that helpful teacher who is screaming in your face for your own good?

Below, in fact, is a cartoon worksheet (click to enlarge that is now in use in KIPP schools to teach the virtues of zest, grit, self-control, social intelligence, gratitude, optimism and curiosity: 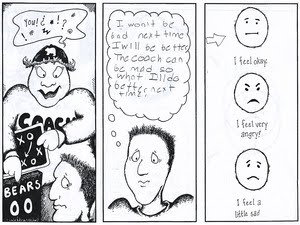 Don't be sad or angry, boys and girls.  Be gritty and grateful!  Don't have a meltdown just because you have been put in isolation after your teacher has humiliated you in front of your classmates.  Show some zest--earns some KIPP dollars.


Logistically, the character report card had been a challenge to pull off. Teachers at all four KIPP middle schools in New York City had to grade every one of their students, on a scale of 1 to 5, on every one of the 24 character indicators, and more than a few of them found the process a little daunting. And now that report-card night had arrived, they had an even bigger challenge: explaining to parents just how those precise figures, rounded to the second decimal place, summed up their children’s character.

Now no one is going to get up in arms about these most marginalized children being treated like caged animals who are taught to be helpless and then happy. After all, these children have already shown they are disposable by the fact that we use taxpayer dollars to fund these corporate reform schools that thrive on this model.  This is the model to emulate in urban America.


But will the public recoil when the Seligman plan comes to privileged leafy enclaves like Riverdale, which it the subject of Part II.