Even though Boston Public Schools knew last Thursday that the time for today's meeting would not be 7PM as previously announced (see time stamp on agenda below), BPS waited until Friday to release the agenda (click to enlarge) with the correct time of 5PM.  Who needs a public for a non-public process, right?

So come early, you noisy bastards, come loud, come ready to speak, and be ready for civil disobedience and non-violent resistance. Spread the word. The public part of the meeting begins at 6PM. 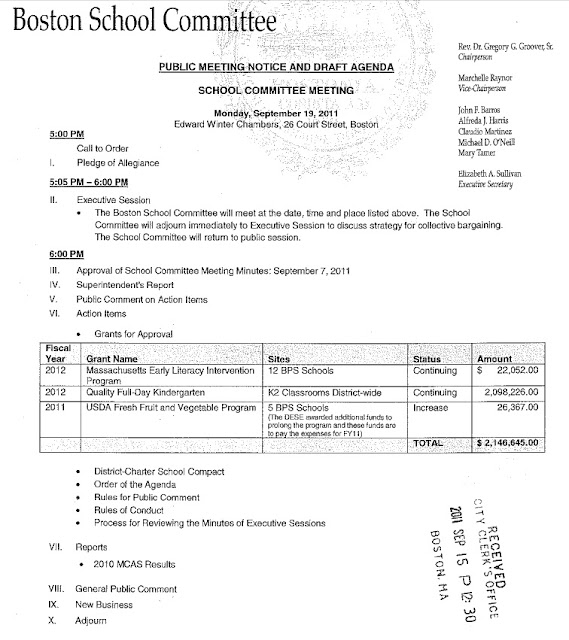 I was able to obtain a copy of the early response to this corporatization plan from Citizens for Public Schools:


To: The Boston School Committee From: Citizens for Public Schools (CPS)
Date: September 16, 2011 Re: The Proposed District-Charter Compact
Citizens for Public Schools has reviewed the proposed District-Charter Compact. It is not at all clear to us what is in it for the city of Boston and the district’s students. We are deeply concerned that this compact, modeled on a national initiative of the private Gates Foundation, is being implemented without appropriate discussion and input from Boston parents, students, teachers, or the broader community.
First, we cannot determine who or what is the Boston Alliance of Charter Schools. The Secretary of State’s office has no record of the organization’s existence. If and when it is formed, will it have authority over all of the current and future charter schools in Boston, superseding the Board of Directors of each of the charter schools? Will it have paid staff and who will pay them? Will it be subject to the open meeting law?
The document gives equal weight to a large urban school system under a superintendent of all district schools and a network of individual school districts (charter schools) designed to be in competition with the public school district and one another. Hardly a level playing field when charter schools are able to cap their enrollment while the district schools must take all comers at any time of the year, or when charter schools are able to limit their enrollment of English Language Learners and students with moderate to severe disabilities, or when charter schools can say to a family and student that the school is not a good fit for them and thereby counsel them out.
This looks like a one-sided agreement benefitting charter schools at the expense of the district students. The public needs to know what financial arrangements have been made in order for these changes to take place. The Gates Foundation has given grants to other school systems in exchange for similar compacts. Is this the case in Boston? How much money has been promised? And for what purposes? Where is the public oversight and accountability?
The proposed “Office of Compact Agreement” is to be a “non-profit” with five representatives from the Boston Public Schools and five from the Boston Alliance of Charter Schools. Again, this is a creation without input of parents, community organizations, teachers and students.  In fact, the Compact proposal fails to mention parents at all. Will this office be subject to the open meeting law? Will it have a budget and staff? Who will pay for it? The Compact allows the School Committee to cede some strategic planning to this new Office of Compact Agreement. This includes school assignment and enrollment issues, always contentious in Boston.
We are especially concerned about the leasing of vacant and under-utilized buildings to charter schools. New York City’s experience should raise a red flag about the potential for children to be displaced and poor neighborhoods hurt when charter schools move in. Clear winners in New York include “edupreneurs” who make millions “managing” public education dollars, real estate moguls, hedge fund managers, and million-dollar charter school “directors” (CETF Responds to RCSD/Charter Compact and School Closings). Parents, meanwhile, are suing the city, taking away resources and energy from teaching and learning.
Will charter schools pay fair market value for leasing schools--what does “charter assistance with transportation” mean?
Charter schools already enroll a significantly lower percent of students with moderate to severe disabilities. Why would the district agree to serve even more of these students, letting charter schools “off the hook” for serving an important group of students who also happen to be more expensive to educate? Beyond “lip service,” what firm commitments are charter schools making to be held accountable for enrolling and serving a representative share of English Language Learners?
The Compact makes no mention of solving the most vexing problem associated with Boston charter schools--their high attrition rate. For years district schools have complained about the disruption caused to students and classrooms when charter school students are sent back mid-year (and often just before MCAS tests are given) to district schools. What commitments are charter schools going to make to substantially reduce their attrition rates?
Why should charter schools have a say in evaluating the efficacy of district schools? Boston has a school department and a school committee as well as the Department of Elementary and Secondary Education and the Board of Elementary and Secondary Education, whose mandated responsibilities could now be taken over by private entrepreneurs whose interest is to have schools close so they can take them over.
At least nine cities have been operating on such Gates Foundation plans, has anyone looked at the results to date?
Ultimately, this proposed compact does little to benefit the Boston Public Schools by addressing the key challenges that charter schools present – high attrition rates which send students and families back into district schools throughout each school year, the substantial under-enrollment of English Language Learners and students with special needs which places a disproportionate burden on the school district to serve these students, and the significant transportation costs for transporting Boston students to and from charter schools across the city. Any agreement with charter schools should be tied to firm and measurable commitments to which charter schools and the district can be held accountable.
Marilyn Segal
Executive Director