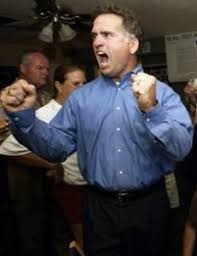 With every brief and successive generation of Tea Party spokesmen and nutjob officials, particularly in Arizona, the current ones make the previous ones seem like lily-livered liberals.  If Ronald Reagan were alive today, for instance, he would have to run as a socialist.

Earlier this year John Huppenthal replaced racist Tom Horne as Arizona's Superintendent for Public Instruction, and since taking over the state's anti-cultural bureaucracy for the perpetuation of whiteness, he has made Horne's earlier efforts to end ethnic studies seem tepid.  When will the Department of Justice take notice of Huggenthal's hate speech?  A clip from HuffPo:

In an astounding affront to Mexican American veterans and military families, the disturbing comments were issued a week after the 61st anniversary of the Medal of Honor award for Arizona war hero Sylvestre Herrera, whose famous capture of Nazi troops was hailed as one of numerous acts of bravery by Mexican American soldiers during World War II.

While Huppenthal, who aired a controversial radio ad last fall that he would "stop la raza," is no stranger to inflammatory speech making, this latest episode comes on the heels of Attorney General Tom Horne's recent charge that the Mexican American Studies program "must be destroyed" and shocking testimony by a Tea Party activist at a Tucson school board meeting with his scenario for "civil war."

At the same time, Huppenthal recently endorsed the recall campaign of disgraced Senate President Russell Pearce, who has openly associated with neo-Nazi and white supremacist organizations.

The questions beg:: Have the extremist Arizona politicians and their Tea Party supporters gone too far in their witch hunt of the Ethnic Studies Program, and at what point will the Civil Rights Division of the US Department of Justice be summoned for an investigation?

Or, at the very least, does Huppenthal owe Mexican American veterans and MAS supporters an apology?
The Arizona Independent Daily blog posted Huppenthal's comments from the GOP gathering last week on the Tucson Citizen site:


"Huppenthal discussed the MAS practice of victimizing, or "racismizing" students. He stated that these same practices were used in the development of the Hitler Jugend. He talked about Nazi's efforts to demonize one group of people in young people's minds. He stated that sheer intellectual power will win over the public when they look at the anti-intellectual nature of the MAS program."

According to the Wikipedia entry, the Hitler Jugend was the second oldest paramilitary organization in Nazi Germany that trained youth in weapons training and assault tactics, and propagated white supremacist and anti-Semitic beliefs.

The comment is particularly disturbing in light of the fact that the Arizona Anti-Defamation League came out against Arizona's controversial Ethnic Studies ban and declared the Mexican American Studies program "so obviously resuscitated the desire to learn in so many students."

Earlier this summer, in fact, an independent audit commissioned by Huppenthal found that the Mexican American Studies program did not violation the state ban, and concluded: "No observable evidence exists that instruction within Mexican American Studies Department promotes resentment toward a race or class of people. The auditors observed the opposite, as students are taught to be accepting of multiple ethnicities of people." The audit noted that courses in the Ethnic Studies Program "graduate in the very least at a rate of 5 percent more than their counterparts in 2005, and at the most, a rate of 11 percent more in 2010," and "are designed to improve student achievement based on the audit team's finding of valuable course descriptions aligned with state standards, commendable curricular unit and lesson plan design, engaging instruction practices, and collective inquiry strategies through Approved State Standards."

Despite the findings of the costly audit, Huppenthal kept his campaign promise and disregarded the report in a bizarre press conference this summer and charged that the MAS program was non-compliant. As part of the appeal process, TUSD and MAS administrators have appeared before a state administrative hearing, which will recommend a decision to the state superintendent. In essence: Once the shoutin' is over, Huppenthal still has the ultimate power over whether the MAS program should be banned or not. . . .