Since the Courts and the American public have made it increasingly clear that they are not in favor of taking money from public schools to offer private school vouchers, a new wrinkle has been introduced in the voucher crusade by the privatizers and the union busters. Regardless of its chances for approval among the American public, it is already a big hit among the corporate welfare types who are always looking for new ways to soak up public dollars while whining free-spending big government.

You see, this new voucher scam offers dollar-for-dollar tax credits to corporations to buy the school vouchers that otherwise would paid for directly from community coffers. Besides the public relations advantage of a less direct assault on public schools, the corporate tax credits carry the added bonus of lining the pockets of privatizers by reducing their taxes while they work to dismantle the public schools. A true case of having your cake and eating it, too.

How this new voucher scheme benefits the public will surely be the subject for litigators as they will certainly challenge the constitutionality of tax reductions for non-public uses. It would seem prudent for New Jersey, then, to cancel consideration of this non-solution to bad urban schools, even though it is the one preferred by nominal Democrat, Cory Booker, and his political patrons at the New York Times.

What Booker and the Times show in spades is a total lack of imagination in dealing with the problem of poor schools in poor communities. Is the solution to give up and farm these kids out to Catholic schools or the KIPP chain gangs, whether or not they want a Catholic education or boot camp indoctrination? Because the police department has not been able to stop crime in Newark, does Booker want to fire the Department and bring in Blackwater mercenaries to patrol the streets there? Why so fast to give up on schools, the last potential democratizing influence in poor children's lives? 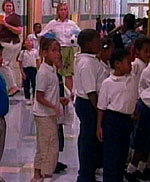 On the other hand, would it not make sense to give corporations tax credits for, let’s see, helping the public schools of Newark and Camden?? Now there is a novel idea! Let Verizon, Prudential Financial, Continental, and MBNA pump some of their millions into Newark Public Schools to transform them, just like the poorest publics are being transformed in Chattanooga, Tennessee. On the News Hours last evening, John Merrow reported on a very successful experiment there that involves a partnership of corporations, foundations, and the school system to provide the financial support to make professional development and curriculum innovation and mentoring and additional coursework possible in the poorest schools of Chattanooga.