The coming of the neocons to ED has meant that subjects other than reading, math, and behavior control have been shoved aside by a plalanx of testing pushed by the ed industry, the testing/textbook industry, and the politicos at the Business Roundtable. Let's not forget, too, the know-nothing politicians who use the testing hysteria as an opportunity to appear tough by punishing schools and children, while turning their backs to the criminals and con men who are carrying off the federal treasury. And, of course, there are the high-placed functionaries such as Spellings, who uses her appointed position as chief steward for American public education to bully, threaten, and squeeze funds from public schools to stuff the pockets of the corporate socialists at Kaplan, Catapult, Princeton Review, etc.

But please don't think that the teaching of American history has been forgotten by this band of capitalists-gone-wild christocrats who are running ED. Imprinting a preferred version of the past on the malleable minds of the young is too important to leave to chance or even to legitmate historiography. The neocons, in fact, have committed almost a $120 million just this year, money that is now being distributed to schools in 38 states in the form of discretionary grants that usually run just under a million each (124 of them this year). These grants are aimed at providing three years of professional development and curriculum materials for cohorts (usually 40-60) elementary and/or high school history teachers at a time. 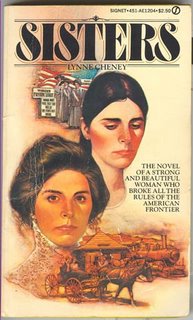 This year's grants were aimed at elementary and high schools that are not making AYP, which, of course, is the most effective way at targeting brown and black populations, who are in need of a good dose of traditional American history. None of that multicultural crap, but good old-fashioned Greek-inspired white Protestant man history. This new traditional history came front and center when Mrs. Cheney, having given up her fling with writing lesbian historical fiction, took on the more serious mantle of preserving real white male Protestant history beginning in the late 80s.

Was it penance for her prurience that Mrs. Cheney was to become the poster lady for the arid Aryanism that is now playing catch-up to that gloomy multicultural history that dared to remind us that the Founding Heroes were mostly owners of other human beings (who they did not consider entirely human). Whatever it was, it spawned a 10-year tantrum by Mrs. Cheney over the National History Standards issued in 1994. Her hissy fit culminated in 2004, when she successfully lobbied ED to burn 300,000 booklets intended to help parents teach their children about American history. Thank you, Mrs. Cheney for helping to keep us on the sunny side of our white heroes.

Today to help quell the uppity multicultural history that became vogue in the 1990s, there is an outfit called the American Institute for History Education (AIHE) that has a turnkey system that seems to have the inside track on getting and implementing the Teaching American History (TAH) grants. AIHE even offers grant-writing consultation and the "scientifically-based" assessments that will show that the brown and black children of America are learning this new traditional history. Kevin Brady, (photo from the John Fenwick Liberty Fellowship Faculty page) President of AIHE, clicked off ten sites where AIHE is partnering with cohorts to bring AIHE materials and their teaching methods and their tests to poor schools across America. 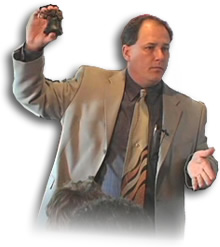 Method of instruction? It's called Binary Paideia (really, it is). From what I can glean from the AIHE CD-ROM Series, which contains tons on the Puritans but not much on the Indians, lots of Hamilton but no Jefferson, plenty of focus on the roles of Hobbes and Calvin (not Calvin and Hobbes) but nothing on Rousseau and not much on Locke, Binary Paideia is a pedagogical process of memorizing dumbed-down false dichotomies that are drawn between different cultures and/or political systems. Lots of bright line contrasts, but little in subtle comparisons or nuanced similarities. A very popular way to approach the world these days, and, of course, exactly consistent with the kind of thinking that Dewey railed against as the most dangerous to social stability and cohesion.

I am betting that the American Institute for History Education is going to do very well during the next couple of years.

Update June 7, 2006: This morning I was able to talk again with Kevin Brady, who doesn't seem to understand how his CD contents could be viewed as conservative. Otherwise, he seems to be a very nice man. Dr. Brady estimated that AIHE, Inc. is partnering with 28 TAH grants, and consulting on an unspecified number of others.
at 11:40 PM