As the deadline has now past for states to fulfill the impossible NCLB requirement for 100 percent of teachers to be highly qualified by 2006, the Orwellian chutzpah of The Education Trust, (aka public relations firm for the Department of Miseducation) has reached a new low. Ed Trust’s privileged sorority girls for the underprivileged have issued a new report, which combines some of their earlier “research,” some very selective reporting from the Illinois Education Research Council (IERC) (whose main points they ignore), and some re-interpretation of both in order to come up with something that parrots the pre-digested talking points of Margaret Spellings.

The main thrust of the report, Teaching Inequality: How Poor and Minority Students Are Shortchanged on Teacher Quality, is to point to an obvious and unpleasant reality, attribute a cause to that reality that is not so obvious or even true, and to make recommendations to change that reality that are not the least obvious and that are the most obfuscating. Using correlations to attribute causation is an old, yet obviously undiscovered, research problem for the wizards at Ed Trust.

Like all the other reports that I have read from Ed Trust, this one begins and ends with the assumption that poverty and racism can be ignored as variables in educational attainment if enough attention is focused on threats, sanctions, manipulations, and other tactics that only skirt the underlying reasons for poor performance in poor schools—poverty and racism. In short, Ed Trust has long ago concluded that if enough prescriptive institutional interventions can be put in place, then the underlying racism and classism of our society can be ignored on our way to, otherwise, ending the achievement gap. Just take a look at the language in the first paragraph of Ed Trust's press release on the report to get a sense of what I mean:

A report out today from the Education Trust provides new information on the impact of teacher quality on student achievement and offers specific steps states should take to remedy the persistent practice of denying the best teachers to the children who need them the most.

In short, if we can force enough good teachers into poor, run-down, and under-resourced schools in communities where children need flak jackets to get to school safely, and where lack of opportunity has withered away hope for community or individual improvement, then we can somehow close the achievement gap. This blindness is much more damaging than the old overt racism of blaming the victim of racism for her plight: the new racism does not even acknowledge that there is a victim, or that racism is a problem that goes way beyond the decisions made by state departments of education. Somehow, this new color blindness contends that if we turn our wishful thinking into enough tactical maneuvers to treat the symptoms (weak educational achievement), then we can continue to ignore the underlying illness (poverty and racism). Ed Trust, then, would solve the problem they have ignored by funneling and forcing more high-performing teachers into high poverty environments that will continue to grind them up just like the current 50 percent of teachers that we lose in high poverty environments within the first five years of teaching.

So what are Ed Trust's recommendations for dealing with the fact that poor schools have the weakest teachers?

The Ed Trust report recommends a range of strategies to end the unfair distribution of teacher talent, including:


Now for a reality check from one of the many newspapers that picked up the Associated Press story:

Tom Mooney, president of the Ohio Federation of Teachers Union, said having all highly qualified teachers in Ohio is difficult partly because half of those hired leave the profession within five years. That rate is higher in urban areas, he said.

"You can't force people to work where they don't want to work," Mooney said. "We don't really have a recruiting problem as much as we have a retention problem.

So instead, then, of trying to Stalinize the teacher supply, or pretending that we can turn teacher recruitment into an NFL draft, even focusing on what states must do to satisfy those at ED who have made it impossible to do so, what if we did something different, something that even recognizes the refusal of today’s racists to acknowledge that racism exists. What if we take the information seriously that is presented in the charts here from the IERC’s Examining the Distribution and Impact of Teacher Quality in Illinois (Full Document). 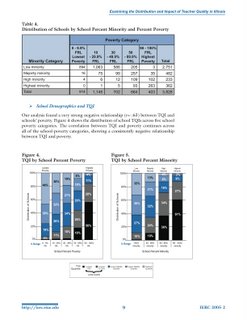 What we can see graphically represented here in the chart (click to enlarge) is what happens to teacher quality when the percentage of children with free and reduced-price lunch is kept under 50 percent, which is very similar, in fact, to what happens when the minority population is held under 90 percent. Teacher quality in schools with less than 50% poor or with less than 90% minority do not have the teacher quality issues of urban schools that do not meet these criteria.

Here, then, is a vital clue as to what could be undertaken as a state or national priority for really affecting teacher quality, as well as the quality of instruction, resourcing, and the greater need to integrate our schools and society.

Economic integration is already happening in a number of localities around the country, as reported in this post and in this story from the Times last Fall, which focused on Wake County, NC:

Since 2000, school officials have used income as a prime factor in assigning students to schools, with the goal of limiting the proportion of low-income students in any school to no more than 40 percent.

The effort is the most ambitious in the country to create economically diverse public schools, and it is the most successful, according to several independent experts. La Crosse, Wis.; St. Lucie County, Fla.; San Francisco; Cambridge, Mass.; and Charlotte-Mecklenburg, N.C., have adopted economic integration plans.

What if ED were really interested in leaving no child behind, rather than using the phrase as a form of doublespeak to conceal their true efforts to shut down public schools and to lobotomize poor and brown children through the creation of chain gang charter schools in urban centers? What if we had as a national goal that by 2014, instead of insuring the failure of the public schools with impossible federal demands, that we have in place a working national plan to economically integrate America's public schools. No doubt much work would remain after 2014 to close the achievement gaps, but at least we would be on our way to doing so, rather than on our way to making sure those gaps remain gaping chasms while we create a generation of lost learners and compliant drones.