Spellings and Her PR Field Trips 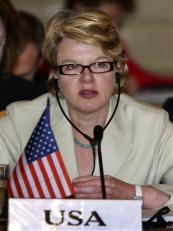 Out of one side of her mouth, Spellings says that her trips to Afghanistan, England, Egypt, France, India, Italy, Japan, Jordan, Russia, Greece and Spain are intended to learn from other countries so that she can apply those ideas at home. From the other corner, she indicates that her mission is to tout the accomplishments of U. S. schools in educating the masses.

In either case, it would seem that Spellings' learning has been disconnected or disabled, since most of the foreign countries she has on her itinerary are trying to escape the pressure cooker testing trap that Maggie is trying to set at home (when she is home). On the other hand, one must wonder if Spellings is describing the same Amerian school system when she is doing her touting abroad as the one she is constantly demonizing and threatening when she is at home.

Will Spellings' apple polisher and media lapdog, Ben Feller, ever notice these inconsistencies? I don't think so, as long as he is getting his passport stamped as well.
at 11:30 AM