Army Recruiters: War, What War--There is No War Going On 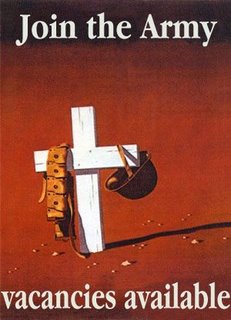 NCLB includes a provision that requires schools to provide children's personal data to desperate Army recruiters who will tell these kids anything to make their war machine quotas. USA Today carried this story on Thursday about the small but growing number of high schoolers who are opting out by requesting that their personal data not be released to the Army's thug recruiters.

Now ABC reports that an undercover investigation reveals widespread abuse among the the current crop of retrained recruiters that were intended to replace the previous group that brought the Army so much bad PR last year. Here are some clips:

Nov. 3, 2006 — An ABC News undercover investigation showed Army recruiters telling students that the war in Iraq was over, in an effort to get them to enlist.

"Nobody is going over to Iraq anymore?" one student asks a recruiter.

"No, we're bringing people back," he replies.

"We're not at war. War ended a long time ago," another recruiter says.

. . . ABC News found one recruiter who even claimed if you didn't like the Army, you could just quit.

"It's called a 'Failure to Adapt' discharge," the recruiter said. "It's an entry-level discharge so it won't affect anything on your record. It'll just be like it never happened." . . .

"They need to do anything they possibly can to get recruits," Niederer said.

Seth was sent to Iraq and was killed by a roadside bomb.

Niederer said she was not surprised by what ABC News had found. She believes it's still a widespread problem. She said that recruiters told Seth he wouldn't be put into combat.

This is the Army of One? Does that mean One Big Lie?