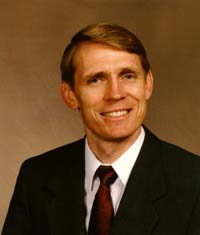 (Photo: Kent Hovind "Dr. Dino")
There hasn't been much fun for fundamentalists during the past couple of days. One of their leaders, the shepherd of a 14,000 member flock and president of an organization that represents 45,000 evangelical churches, has admitted to buying meth and getting "massages" from a male prostitute. But he is quick to point out that he didn't inhale--the meth, that is.

At the same time, creation "science" leader, museum director, and evangelist, Dr. Kent Hovind (Dr. Dino) and Mrs. Hovind have been convicted on dozens of counts of tax fraud in Florida. While awaiting sentencing that could range from 255 to 285 years in the pen, Dr. Dino is cooling his heels in the Pensacola jail, while Mrs. Dr. Dino remains free.

Dr. Dino, famous for his $250,000 offer to anyone who could "prove evolution," obviously had squirreled away more than that amount from what he should have been paying in federal taxes. In rejecting the premise of evolution, Dr. Dino once told the New York Times that "no one has ever observed a dog produce a non-dog." Nor has anyone, Dr. Dino, seen a fraud live the life of a non-fraud.
at 9:44 AM