This clip from Paul Krugman is from Raw Story:

Why do I want to see movement conservatism crushed? Partly because the movement is fundamentally undemocratic; its leaders don't accept the legitimacy of opposition. Democrats will only become acceptable, declared Grover Norquist, the president of Americans for Tax Reform, once they "are comfortable in their minority status." He added, "Any farmer will tell you that certain animals run around and are unpleasant, but when they've been fixed, then they are happy and sedate."

And the determination of the movement to hold on to power at any cost has poisoned our political culture. Just think about the campaign that just ended, with its coded racism, deceptive robo-calls, personal smears, homeless men bused in to hand out deceptive fliers, and more. Not to mention the constant implication that anyone who questions the Bush administration or its policies is very nearly a traitor.

When movement conservatism took it over, the Republican Party ceased to be the party of Dwight Eisenhower and became the party of Karl Rove. The good news is that Karl Rove and the political tendency he represents may both have just self-destructed. 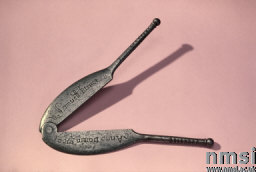 How "happy and sedate" are you feeling this morning, Grover??
at 8:33 AM