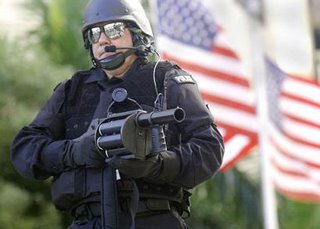 Hope is in short supply in New Orleans following Katrina. With the black diaspora induced by the malignant neglect of neocons intent upon creating a new white New Orleans, thousands of black parents have been left high and dry, shall we say, and dispersed to every part of the country. In the meantime, many of their children are in New Orleans trying to carry on without parents.

Now the rage of these children is starting to boil over, which is the subject of this story in today's Times. A clip:

In the last six weeks, students at McDonogh, the largest functioning high school here, have assaulted guards, a teacher and a police officer. A guard and a teacher were beaten so badly that they were hospitalized.

The surge hints at a far-reaching phenomenon after Hurricane Katrina, educators here say. Teenagers in the city are living alone or with older siblings or relatives, separated by hundreds of miles from their displaced parents. Dozens of McDonogh students fend largely for themselves, school officials say.

“They are here on their own,” Wanda Daliet, a science teacher, said. “They are raising themselves. And they are angry.”

The principal, Donald Jackson, estimated that up to a fifth of the 775 students live without parents.

And where is Spellings as New Orleans schools explode? Of course, she is handing out cash in Ohio trying to buy teacher votes. She remains blind to this situation, which she would not care about anyway. Her interests in New Orleans are restricted to the promotion of vouchers and corporate welfare charter schools that will charge the public for the extra private police guards to keep the lid on the hopeless state of affairs there.

Plenty of material here for a new season of John Seigenthaler and the new cable police channel, MSNBC.