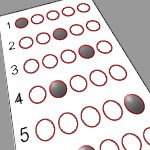 Jim Popham has said repeatedly that testing is not bad--it's the tests that are. At a conference I attended last year, he estimated that 90% of the high-stakes tests in use are, in his words, "junk." This has led some, the sane ones, to conclude that the current testing hysteria is doomed to create more harm than good for everyone except the test industry. But as one of the great minds of the previous century recently told his troops, we go to war with the tests, er, the army that we have. Stay the course, full steam ahead, and pass me a scantron sheet.


Here is the heart of a piece that appears this week in Ed Week by Jere Confrey, math ed professor at Washington U. Do you think there will ever be a time when university people are listened to again at ED? I think so, but it will be after Spellings and fake science guys are put aboard Duke Cunningham's yacht and sent floating down the Potomac:

There are critical weaknesses in the testing system. Chief among them is the failure of most assessment systems to inform teachers of specific shortcomings in their students’ learning. Tests are frequently neither scaled nor equated at the level of subtopics—numeration, measurement, probability and statistics, or geometry, for example. As a result, the difficulty level of these clusters of items varies from year to year. Low scores at the subtopic level send teachers and parents scurrying to improve topic instruction. But poor (or strong) performance on a topic is as likely to be the result of harder (or easier) test items as of deterioration (or improvement) of instruction from one year to the next.

We cannot be distracted from our primary mission while we bicker over modest differences in approach.

High-stakes test construction also narrows the content, depresses the cognitive level, and encourages teaching to the test. We see test scores gradually rising, yet the detrimental effects of teaching to the test resurface whenever a new test is used and failure skyrockets. And too many states fail to release actual test items with results. Withholding these denies teachers and students valuable feedback about the test and is unethical. It obscures scoring mistakes and permits poor or ambiguous test items to escape scrutiny and correction. Though new tests are expensive to generate each year, item banks and automated creation of equivalent test items make it economically feasible. To whom are the testing companies accountable?

Quality outcome measures also are determined by the test-data quality, the fairness of data use, and the determination of what is and is not acceptable performance. Professional standards dictate that a single measure should never be used to determine high-stakes consequences for children. (Multiple administrations of a single test still constitute a single measure.) Disaggregating scores into demographic categories can shine light on gross inequities, but reaching feasible remedies will require more-sophisticated approaches. Improved data analysis and display methods permit us to look deeper at what is happening in achievement than reports of the percentages of students who pass. We need to examine distributions of scores in their entirety and compare performance on diverse tests. The federal No Child Left Behind law, with its emphasis on a modest passing rate on mandated tests, implicitly authorizes us to leave behind up to 50 percent of students if they do not pass those tests. These students drift away steadily, with the result that graduation rates in this country now approach a scandalously low 68 percent (many minority groups’ rates hover at only 50 percent).

The test data, moreover, should be easily accessible for exploration and challenge by advocates for particular subgroups. Our society supports endless real-time data analysis for every major sporting event, yet can’t seem to provide adequate data to guide fair educational practice.

Even with improved linkages between standards and tests, however, the bookends approach to reform will be insufficient to the task of fixing American mathematics education. The missing piece is improvement in how the subject is taught to students on a daily basis in the majority of classrooms across the United States. This demands that we reject the long-standing federal neglect of the instructional core: the curriculum, pedagogy, and formative assessments that make up everyday classroom practices in K-12 math. It has been politically expedient to ignore the instructional core—to maintain the appearance of local autonomy and low federal involvement, and avoid the investment required for improvement. But that has resulted in public education systems’ withering while the government trumpets its devotion to “leaving no child behind.”

Assessment to improve teaching and learning? See the Nebraska model based on classroom-based assessments.