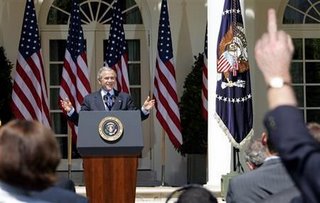 Yesterday’s press conference with The Decider was telling. First, there was the demeanor I would describe as chagrined resignation and grudging relief, a familiar posture, perhaps, for Bush, who must have presented a similar personae at the botching of other and numerous life ventures that eventually brought rescue from Poppy.

So while Bush calmly and with a straight face explained a Decider desire to reach out and to be bipartisan during the next two years, he knew that Poppy and Uncle Jim Baker were already pulling the plug on his Big Iraq Adventure: Rumsfeld was already packed and out the door, and the Hamilton-Baker Iraq Study Group was already formulating an Iraq policy that W, Dick, and Condi would be handed once it is completed. The adults had already taken over.

Now Bush can be the President he always wanted to be: one who issues orders for what goes in the tackle box and on the dinner table, one who decides who gets to ride on the Presidential helicopter, one who waves to the peering tourists, and one who will never have to do another day of Presidential work. Yes, these next two years in the White are going to be pretty sweet. We might say it could be just ducky.

Don’t expect the backwards-thinking agenda of the corporate socialists to disappear, however. The Decider, in fact, offered up No Child Left Behind as a prime example of the kind of bipartisanship that he is now advocating. Will we see “full speed ahead” on reauthorization of NCLB, or will we see a Democratic Congress taking a breath to listen to the growing grassroots rumble among an electorate fed up with the transformation of schools into the stupidifying pressure cookers that render up America’s children for a risky education privatization recipe? Will there be a Hamilton-Baker equivalent to try to bail the nation out of W’s education debacle? Stay tuned.
at 9:47 AM