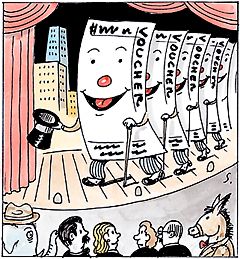 The education privatizers will stop at nothing, including the law, to get at the half-trillion a year that Americans spend on education. How deep does the corruption go, and where will the money trail lead? From the Journal Times:

MADISON - All Children Matter, a pro-school voucher group based in Michigan and operating in many states, laundered money and failed to register as required under Wisconsin state law, according to a new election complaint.

The complaint filed Friday with the state Elections Board says an All Children Matter political action committee based in Virginia should have registered in Wisconsin before it donated $35,000 in October to its Wisconsin PAC.

The complaint also alleges that a $90,000 donation made to the Virginia PAC from a group not registered with Wisconsin election officials - the Milwaukee-based Alliance for Choices in Education - violated a state law barring corporate contributions.

The complaint argues the $90,000 wound its way back to Wisconsin through the $35,000 donation spent on ads criticizing three Democratic legislative candidates - John Lehman and Cory Mason of Racine and Pat Kreitlow of Chippewa Falls. All went on to win.

"Such a scheme to launder campaign contributions frustrated the right of Wisconsin's voters and citizens to know who provided the $35,000," the complaint said.

The complaint asks the Elections Board to require the Virginia PAC to comply with reporting and disclosure requirements under Wisconsin law, showing who made contributions, and return the $90,0000 to the Alliance for Choices in Education.

Attorney Richard Saks of Milwaukee, who filed the complaint on behalf of two individuals, the Wisconsin Federation of Nurses and Health Care Professionals and the Milwaukee Teachers' Education Association, said ACE faces a penalty of up to three times its donation, or $270,000.

State Elections Board spokesman Kyle Richmond said the complaint likely will be taken up at the board's Jan. 17 meeting.

The new complaint is in addition to one the board took up at its November meeting related to All Children Matters' spending in the election.

Elections Board Chairman John Savage said at that meeting that the board may pursue criminal charges for making a false filing against All Children Matter if there is evidence showing that someone other than the Wisconsin PAC paid for the ads in question.

All Children Matter attorney Kevin St. John of Madison said he had not seen the latest complaint and had no immediate comment. George Mitchell, director of the Wisconsin arm of the group, referred all questions to All Children Matter executive director Greg Brock in Grand Rapids, Mich. He did not respond to telephone or e-mail messages seeking comment.

The Wisconsin president of Alliance for Choices in Education, Susan Mitchell, did not immediately return a call seeking comment.

It has been active across the country in political races, including Wisconsin where it paid for a TV ad this fall attacking incumbent Democratic Gov. Jim Doyle.

Just who funds the group, and its involvement in campaigns, has been an ongoing question in many of the states where it operates, including Texas and Florida.