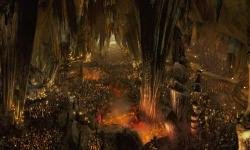 Just like the human recalcitrants in the Matrix movie trilogy, multiculturalists have moved far underground in hopes of re-grouping someday when rule by the Illusion Machine finally runs down from a shortage of fresh, fleshy batteries willing to be sucked dry and discarded like so many husks. You have go get 2-3 pages deep, nowadays, into a Google News Search before finding anything going on in what was once celebrated at ground level as multicultural education. One of the few hits I could dig up was this conference at SUNY-Birkenstock (New Paltz), where they have a surviving degree program in multicultural education. Even here, we see the sucking tentacles of the metrics matrix in the title of the conference: “Opening Minds, Closing the Gap: Fostering Achievement and Equity for All.” Could there truly be anything sadder!

Today's real-world illusion farm is driven by a political machine stoked 25 years ago by the coalition of conservative elitists and blue-collar racists (Reagan Democrats). One of the chief educational accomplishments of those technocratic conservatives and social reactionaries over the past 25 years has been the elimination of equality and multiculturalism as principal concerns of K-12 education. The election of Reagan, in fact, signaled that the civil rights work in the schools was over. Furthermore, the gains made by minorities during the 60s would have to be paid back with the acceptance of a never-ending series of confidence-crushing exams that became central to the new accountability-driven schooling based on privilege by test score--thus privilege by income. The rich get richer, the poor get dumber.

By the time Bush Co. arrived in Washington with the Texas Miracle ready to go live uplink to everywhere 24/7, the think tanks, talk radio, and the corporate media had already marginalized anything multicultural as politically-correct groupthink that threatened national sovereignty. No Child Left Behind, with its threats, sanctions, and mandates, would then accomplish what no amount of bad-mouthing could complete--the casting out of multicultural, racial, and gender concerns into utter oblivion. What got tested got taught, and there was nothing on the McGraw-Hill or Harcourt tests that could be even vaguely associated with cultures, any cultures. The only culture to survive would be the one that can be bought.

The predictably-weak results on mandated standardized tests in poor communities would lead, then, to the jettisoning of any remnant of multicultural curriculums and the stripping down of content to the bare bones, followed by the implementation of direct instruction and straight-jacket behavioral mod techniques. This would, indeed, put black pride and the minority esteem back in their places at the back of the bus.

Recall America's doddering dopey granddad, Reagan, in 1983 (the year of A Nation at Risk) in his thinly-disguised repudiation of our recent civil and human rights gains:

The schools were charged by the federal courts with leading in the correcting of long-standing injustices in our society. Racial segregation. Sex discrimination. Lack of support for the handicapped. Perhaps there was just too much to do in too little time.

Yes, yes, those activist Courts that now, after a generation of conservative re-packing, are on the brink of re-writing the Brown decision, thus re-activating Apartheid in America. What is that tinny echo I hear being transmitted to all those warm, wired cocoons, No Child, what?
at 10:00 AM