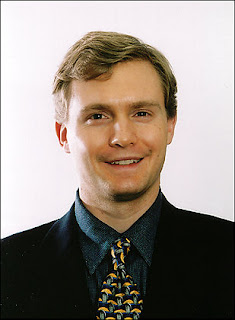 It's a small world when it comes to the manipulation of facts to promote right-wing ideology. Former Surgeon General, Richard Carmona, has testified before a Congressional committee on how the Bushies suppressed science to fit politics. Now we know who was was leading the effort to shelter the American public from the facts that don't fit the Bushie political agenda. The Washington Post has this on the lead censor, William Steiger:

. . . . Steiger, 37, is a godson of former president George H.W. Bush and the son of a moderate Republican who represented Wisconsin in the House and hired a young Dick Cheney as an intern. The elder Bush appointed Steiger's mother to the Federal Trade Commission in 1989. A biographical sketch of her on the American Bar Association's Web site states that Steiger's parents, now deceased, were "lifelong friends" of many members of the same congressional class, including the Rumsfelds and the Bushes.

According to a résumé Steiger supplied to Congress, he obtained a doctorate in Latin American history from the University of California at Los Angeles before teaching at a university in the Philippines and consulting in Angola for the International Republican Institute -- a nonprofit group that is associated with the party and promotes democracy around the world. He was an education adviser to then-Gov. Tommy G. Thompson (R) of Wisconsin and came to Washington when Thompson became HHS secretary. He is now awaiting a Senate vote on his nomination as Bush's ambassador to Mozambique.

Bill Hall, an HHS spokesman, said Steiger promoted interest in global health at the department while more than doubling the number of expert staff members overseas and participating in international negotiations on issues such as avian influenza. "You have to look at his skills as an executive leader in spite of the fact that he doesn't have a medical degree or a public health degree," Hall said.

Public health advocates have accused Steiger of political meddling before. He briefly attained notoriety in 2004 by demanding changes in the language of an international report on obesity. The report was opposed by some U.S. food manufacturers and the sugar industry.

According to Walling and three other public health officials familiar with the current dispute, Carmona at one point suggested that Steiger release the global health report in tandem with a separate report of the sort Steiger wanted, but Steiger rejected the idea. An appeal by Carmona to Health and Human Services Secretary Mike Leavitt and his staff produced no relief, a former HHS official said.

"I fought for my last year to try to get it out and couldn't get it past the initial vetting," Carmona testified earlier this month. "I refused to release it [with the requested changes] . . . because it would tarnish the office of the surgeon general when our colleagues saw us taking a political stand."

Thomas Novotny, a former assistant surgeon general who ran the global health office before Steiger, said, "It's embarrassing, just ridiculous that the report hasn't come out." Novotny, who served at HHS in the Clinton and in both Bush administrations, said that many nations have made health issues central to their foreign relations and trade policies, but that the United States has been reluctant to embrace that idea.

"It made perfect sense for the surgeon general to take up the issue because the U.S. used to be a leader in this field," Novotny said. "For the nation's top doctor to be unable to release the report shows that leadership is gone."

The global health document was one of several reports initiated by Carmona that top HHS officials suppressed because they disliked the reports' conclusions, according to a former administration official. Another was a "Call to Action on Corrections and Community Health." It says -- according to draft language obtained by The Post -- that the public has a large stake in the health of the 2 million men and women who are behind bars, and in the health care available to them in their communities after their release.

The report recommends enhanced health screenings for those arrested and their victims; better disease surveillance in prisons; and ready access to medical, mental health and substance abuse prevention services for those released.

But the report has been bottled up at HHS, said three public health experts who worked on it. John Miles, a consultant and former Centers for Disease Control and Prevention official who helped draft it, said he suspects that the proposed health screenings and other recommendations are seen as a potentially burdensome cost. "Maybe they just don't feel it's a priority," Miles said.