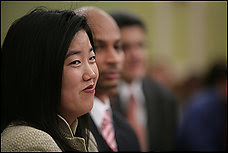 Blame the school, blame the teacher, blame the student, but never, ever blame the system that perpetuates the poverty while it continues to pay Michelle Rhee's $275,000 salary.

Rhee, 37, has never been a superintendent or chancellor and taught for just three years in Baltimore public schools more than a decade ago.

But at a D.C. Council confirmation hearing, two dozen witnesses testified that Rhee's management skills and her passion for educating underprivileged children outweighed her inexperience. The council will vote on her nomination July 10.

Rhee testified that being poor would not be an excuse for low test scores under her leadership. "We will no longer describe failure as the result of vast impersonal forces like poverty or a broken bureaucracy," she said. . . . .