"There are two novels that can change a bookish fourteen-year old's life: The Lord of the Rings and Atlas Shrugged. One is a childish fantasy that often engenders a lifelong obsession with its unbelievable heroes, leading to an emotionally stunted, socially crippled adulthood, unable to deal with the real world. The other, of course, involves orcs." — John Rogers

I'm frequently accused of hyperbole. The charge might merit some consideration in a context other than the struggle against neoliberal corporate education reform. The truth is that these reformers often exceed my imagination for absurdity. Here's an example to file in the truth is stranger than fiction section. Consider the following tweet shilling for Eli Broad's Urban Residency graduate Marshall Tuck (who favorited the tweet, by the way):

go @MarshallTuck ! real leadership on education in CA. the nation is watching. please help him out! - http://t.co/nJUs9qtmND

I'm not sure if I had seen Davidson's or his organization's names on rightwingwatch.org, or if it was the melodramatic "the nation is watching" that raised a red flag, but I decided to dig a little more. Within seconds on their site, while fighting through the revulsion of seeing arch-reactionary buzzwords like "meritocracy," "entrepreneurship," "competition," and "individual responsibility," I noticed a pull quote on the lower left, just under the menus. A noxious quote from libertarian fantasy writer Ayn Rand. 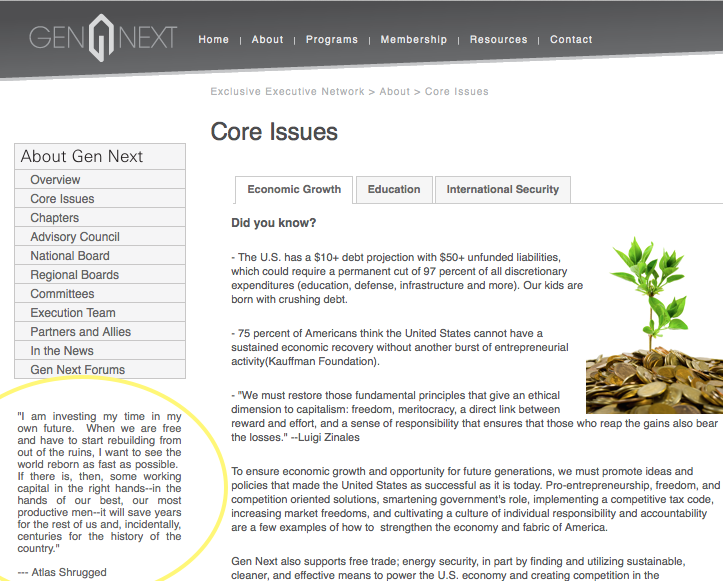 Gen Next's "Core Issue Education" tab reveals the prototypical neoliberal corporate education reform program, ending with this disgusting jingoistic gem: "it is imperative that we produce students who are prepared to compete in a global economy and ultimately help maintain U.S. dominance in the 21st century." If that's one's starting point for the purpose of education, it's no wonder that they — like Tuck — get every single issue wrong.

I recently wrote about how one of Tuck's fellow Broad Urban Residency alumni, Dan Chang, has recently begun funding Tuck with the SuperPAC he started originally to fund erstwhile Los Angeles Unified School District candidate Alex "ALEC" Johnson. Chang, who fought vigorously against the changing of Green Dot Charter School Corporation's program of indoctrinating students in "a belief in the values of democracy and capitalism," also suffers from that problem that most right-wingers have — a difficulty understanding that their heroes John Galt and Howard Rourke are fictional characters (and loathsome ones at that).

"The tech world presents an interesting case study. While some big employers and conferences could institute bro-deterring policies, it’s more like a culture than a corporation. It’s got a widely acknowledged race and gender problem: The Titstare dust-up is just the latest example in a series of sexist incidents. And, like so many college dudes who totally dug The Fountainhead, tech leaders tend to share a belief our culture is a meritocracy and that caring about diversity is antithetical to producing good work — which means that the industry’s bro problem is self-perpetuating. “The Valley,” said Gawker editor John Cook in a recent Times piece about the blog Valleywag, “is a target-rich environment for someone who is looking to expose profligacy, ego and self-regard.” All hallmarks of bro culture."

Amusingly, Davidson's attributing "real leadership on education in CA" to Tuck is actually more chimerical than the fanciful heroes of Rand's trashy novels. At the end of the day Rand, despite all her railing against collectivism, took both Medicare and Social Security payments, since she couldn't live on her right-wing fantasies. Tuck, Chang, and Davidson would do well to learn from their idol's humbling lesson.