I would say Marguerite is turning in her grave, but her family hasn't even had time to bury her before the very forces she fought against on the Board and political opportunists are seeking to harm the schools and children she fought so passionately to protect. — Celes King IV 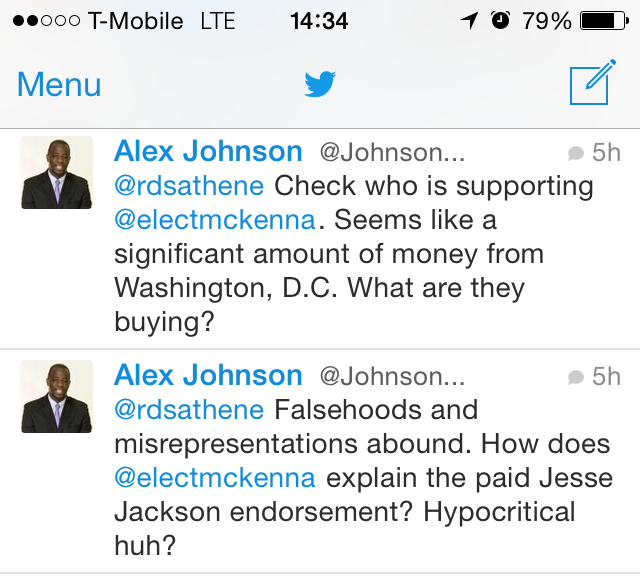 Tuesday, August 12, 2014 there is a special election in Los Angeles. It is critical in that it is for the District 1 board seat on the nation's second largest school system, Los Angeles Unified School District (LAUSD). As the runner up in the 2013 LAUSD District 2 election, I reached out multiple times to the Alex Johnson Campaign early on — only to be ignored. The idea of the plutocrat class (read Eli Broad et al) installing another one of their rubber-stamp policy makers is of grave concern. I wrote this about Johnson back in mid-April:

He has dodged multiple requests for policy positions, undoubtably because he is a hand puppet for the neoliberal corporate education reformers.

After months of his stonewalling, I received a pair of tweets from the official Alex Johnson Campaign account the weekend before the election. Here is the tweet of interest:

I don't know which is more revolting and repugnant: Alex Johnson's continued besmirching of Dr. George McKenna, or his vile statement that civil rights luminary and Presidential Medal of Freedom recipient, the Reverend Jesse Jackson, would take money to endorse. Either way, libel of this magnitude is breathtaking.

While I was focused on Johnson's ongoing smearing of Dr. McKenna, it was my fellow education activist Ingrid Villeda that astutely pointed out the implications of the latter issue. Moreover, in plumbing all new despicable depths, Johnson is attacking Congresswomen Maxine Waters, who sponsored a community celebration with both McKenna and Jackson.

The constant stream of mendaciousness and shameless from Alex Johnson's camp has been covered by numerous Los Angeles media outlets. Notably, even anti-public school hack Jim Newton of the Los Angeles Times took issue with with Johnson's lies calling out a "scurrilous piece of mail" sent by his supporters. Neoliberal corporate education reformers really have to be beyond the pale to earn a scolding from Newton.

I've written a number of exposés on Johnson over the past months, but I have an inkling that the last piece in this list is what really irked them into responding.

Given Johnson's aversion to truth, it's no wonder he reacted the way he did. Let's hope the the huge charter and plutocrat funding that both Johnson and his backer, Mark Ridley Thomas, have behind them doesn't fool the voters in LAUSD District 1. Johnson's vicious attacks on Jesse Jackson, Maxine Waters, and George McKenna are reprehensible!

UPDATE: it looks like the Johnson campaign is beginning to delete all of their vicious accusations. It's clear his ZERO integrity matches well with his ZERO background in education policy and pedagogy. H/T to the Daily News reporter for catching this.