Ritz's Attacker and the School Privatizers

In the “memo,” CECI members criticize the IDOE’s “grammatical errors” and accuse IDOE of making policy changes without the state board of education’s approval while seeking the NCLB waiver for the state.

Obviously, Fiddian-Green is merely attempting to smear Glenda Ritz so that the powers-that-be running the school privatizing agenda in Indiana can continue to have their way.

And Fiddian-Green has mingled with many in the school privatizing movement in Indiana over the years and carried their bottled water.


Fiddian-Green begins her "career" with mega-drug giant and corporate school promoter Eli Lilly, where she was a senior analyst in Eli Lilly’s Corporate Finance Investment Banking group.
The CECI front-woman then became a grant officer for the Richard M. Fairbanks Foundation which backed Indy Mayor Bart Peterson’s charter school movement and financed the Mind Trust with at least $4.6 million, where Fiddian-Green ended up working.

Claire Fiddian-Green has sat on the board of KIPP Indy, too, a for-profit dropout factory once visited by hedge fund operator and DFER’s Whitney Tilson.


Tony Bennett finally picked Mind Trust's Fiddian-Green to run the Indiana Charter School Board, where she had a killer privatizing team with Todd Huston who now is at the College Board pumping Bill Gates' Common Core.
Huston saddled taxpayers with a $1.7 million bill when he left his job as Tony Bennett’s chief of staff to land a gig with Cisco Systems then turned around and sold Bennett video-conferencing equipment from Cisco which was never used, some of it never even delivered.
In August 2012, Fiddian-Green handed over $250 to Tony Bennett’s unsuccessful and billionaire-loaded reelection campaign, so she was conniving against Ritz even before Ritz was elected by the people.

AP’s Tom LoBianco, in his piece on Fiddian-Green’s “memo” assault against Ritz, quotes from New America Foundation’s Anne Hyslop who says “I think this 28-page memo doesn’t help the state’s chances. It’s really demonstrating this dysfunction that Secretary Duncan was worried about 8 months ago.”

Hyslop didn’t point out that this “dysfunction” is NOT Glenda Ritz's fault.  And don’t expect Hyslop to.


Before coming to the New America Foundation, Anne Hyslop worked for Bill Gates’ Education Sector, co-founded by none other than DFER’s past director, Andy Rotherham, who is a big player in Hoosier School Heist.
A Clintonite, Rotherham funds Obama.  He also sits on the board of the Mind Trust, Fiddian-Green’s old stomping grounds.
MILKING IT LEFT AND RIGHT 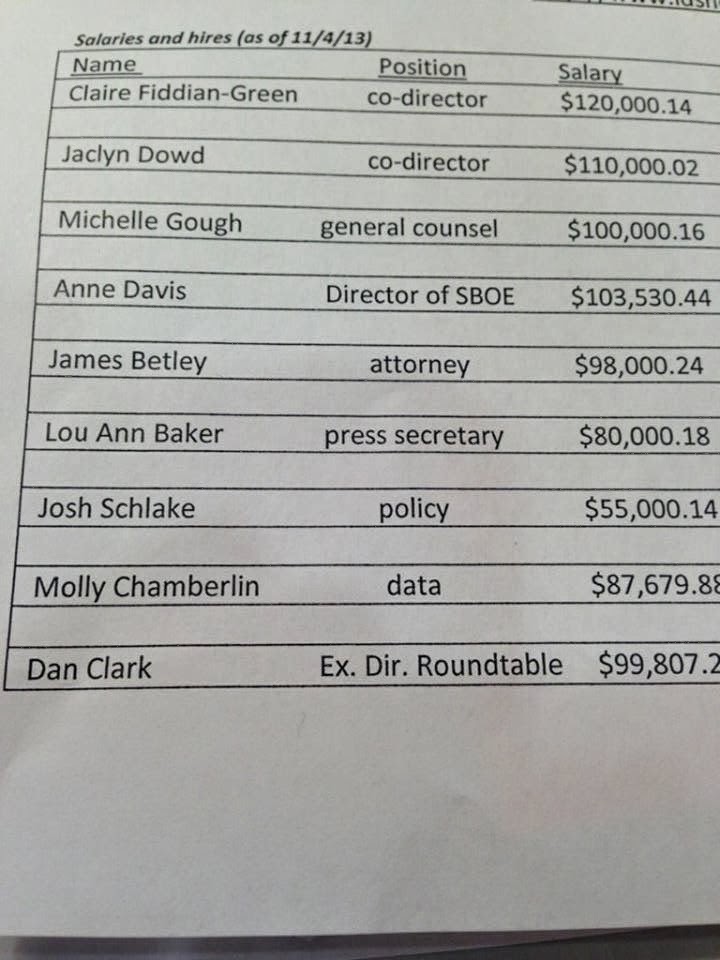 Without having received one single vote from the Hoosier public, Claire-Fiddian Green is still milking school privatization for all it’s worth, making $120,000 in taxpayer money a year as the CECI's helmsperson, more than the democratically elected Ritz.