It's easy to understand how PBS and NPR can remain commercial free, once you accept the fact that they are heavily sponsored by billionaires and their foundations who get their commercials worked into the news stories, themselves.  Call it the latest in product placement.

Over the past 8 years, NPR has received millions from the Gates Foundation to “to expand NPR education coverage and broaden its audience’s engagement on the issue,” as the scroll read in 2013, when NPR landed $1.8 million.

In June 2014 it was revealed that "Teaching Channel Presents" for PBS was really an opportunity for Bill Gates to advertise the virtues of the Common Core to unsuspecting teachers and parents and to build support for new product lines from the Microsoft/Pearson collaboration.

It's no surprise that this week's PBS News Hour "Rethinking College" series on the future of higher ed for the poor follows the same pattern, while pretending to oh-so objective.  It is funded by
As reported in the CHE series on advocacy philanthropy in higher ed last year, Lumina and Gates have an established pattern of philanthropic investing to serve their own business and political interests, which include low income student borrowers and high tech solutions for those same low income borrowers:


. . . .money from the two largest philanthropic supporters of higher-education reform, Gates and Lumina, tends to converge on the same group of recipients. These include colleges, like the competency-based, online Western Governors University (the recipient of $8-million in grants from the two foundations); nonprofits like Jobs for the Future ($59-million from both) and Complete College America ($10-million); and research shops, like the Institute for Higher Education Policy ($10-million) and the New America Foundation ($4-million).

Lumina has been particularly aggressive in working with the American Legislative Exchange Council to shape model laws for states that will advance their paternalistic interests.  This is detailed in a research piece by Hall and Thomas, who presented their paper at AERA a couple of years back.  The paper is a must read--here is a sample on the Gates and Lumina phenomenon: 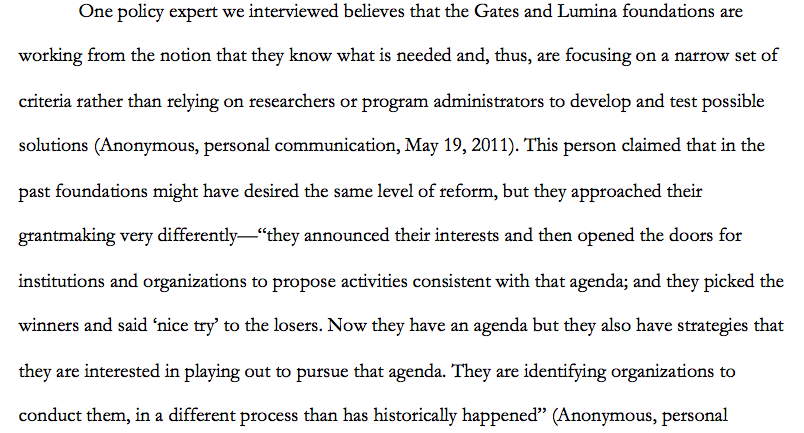 So it is not surprising to see segment after segment of "Rethinking College" focused on high tech solutions to college affordability and paternalistic corporate efficiency solutions to managing colleges.  Never mind that those students ending up with big college debts are more likely to have worthless degrees and the same economic disadvantages facing them as they did when corporate higher ed began engineering their paths to lives of indentured servitude and underemployment.

Finally, on the MOOCs segment.  PBS never mentions their "Rethinking College" has been re-thought by Lumina and Gates, and, yet, when presenting research during the MOOC segment that challenges the pedagogical value of MOOCs, PBS could not resist the need to mention that the research was paid for partially by a teachers' union.  That's the kind of fair and balanced that PBS wants to portray for those foolish enough to send them money during their endless pledge drives.

By the way, here is the video that offers some highlights of the research on MOOCs: