The Koret Syndrome, A Manhattan Prostitute, and A Florida Pimp 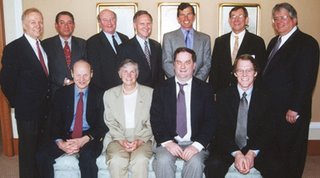 With an unblinking audacity that would make a Vegas madam blush, Jeb Bush marched out this week his lineup of bought researchers to make the case for the torture classrooms and testing practices that have been condemned by every psychological and educational organization in the country.

First up on Wednesday was the Fordham Foundation/Hoover (Koret) group with their "study" headed by statwalker, Paul Peterson, of faked voucher study fame. This group of scholars/education privatizers was paid $250,000 by Jeb supporters to come up with a recommendation to roll back the reductions in class size requirements approved earlier by Florida voters.

Right on cue, Peterson announced that "the class-size straitjacket needs to be lifted." And, of course, poor children should be allowed to attend private schools at public expense. Never mind that the Florida Supreme Court ruled such practice as unconstitutional.

Then on Thursday, the Bush family's other dependable scholar, Jay Greene, was trotted forward to proclaim that the genocidal policy of using the FCAT to retain 3rd graders was actually good for children.

The outgoing Governor Bush was quick to point out that these findings were produced by "academics, not politicians." These, of course, are the same academics who, like their counterparts in White House Office of Special Plans, designed the NCLB war debacle on the public schools in 2001. Mere impeachment would be too kind.
at 9:16 AM