Reid, Chris, and the Barracudas: More from Reading First Finding #4 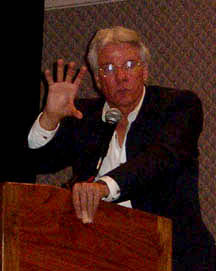 (Photo: Reid Lyon, Bush's Former Crackpot Reading Czar)
This OIG Report is only the first in a series that is planned for Reading First before the end of this year, but don't expect OIG to name names. That will only come with a criminal investigation or from a filing for OIG documents under the Freedom of Information Act. Or from a reporter with the resources and the gumption to get the facts. Any formal investigation aimed at getting the facts will have to be launched from outside ED, unless Spellings intends to surrender and resign.

There is so much rich and readable detail in this section on how Doherty, Lyon, unnamed panelists, and senior advisors stacked the deck to make sure that Direct Instruction beat out all comers that I have posted this section in its entirety from the OIG Report:

Congress, through Title 1, Part B, Section 1203(c)(2)(A) of the ESEA, envisioned an expert review panel with equal representation from the Department, NIFL, NAS, and NICHD. As we reported in Finding 1A, the Department nominated a majority of the individuals serving on the expert review panel. Additionally, 15 of the 16 subpanels had a majority of Department-nominated panelists and none had the balanced composition envisioned by Congress.

The Reading First Director took direct action to ensure that a particular approach to reading instruction was represented on the expert review panel. Direct Instruction (DI) is a model for teaching that requires the use of Reading Mastery, a program published by SRA/McGraw-Hill, to teach reading. The Reading First Director formerly served as the Executive Director of the Baltimore Curriculum Project, which has implemented DI in Baltimore City schools since 1996.

A Baltimore City Public Schools official contacted a Department official to express concern that two panelists were involved with or employed by DI and questioned whether those two panelists indicated their connections to DI on the conflict of interest form. In May 2002, the Department official forwarded this information to the Reading First Director who passed the concerns on to one of the panelists in question as a “Confidential FYI.” This panelist replied:


The subsequent e-mail response from the Reading First Director suggests his intention to ensure a DI presence on the expert review panel: “Funny that [the Baltimore City Public Schools official] calls *me* to inform that there may be some pro-DI folks on *my* panel!!! Too rich!” The panelist then asked, “Does he know who you are? Past and present?” The Reading First Director replied, “That’s the funniest part – yes! You know the line from Casablanca, ‘I am SHOCKED that there is gambling going on in this establishment!’ Well, ‘I am SHOCKED that there are pro-DI people on this panel!’”

A few days before the Department publicly announced the panelists it had chosen to serve, one of the Department-nominated panelists contacted the Reading First Director and shared his strong bias against Reading Recovery and his strategy for responding to any State that planned to include Reading Recovery in its application. The Reading First Director responded: “I really like the way you’re viewing/approaching this, and not just because it matches my own approach :-), I swear!” This individual later served as the panel chair for the subpanel that reviewed Wisconsin’s State application and in response to the State’s plans to use Reading Recovery, he included an 11-page negative review of Reading Recovery in his official comments on the application.

Around the same time, Reid Lyon, the former Chief of the Child Development & Behavior Branch at the NICHD, advised the Reading First Director, the Assistant Secretary for OESE, and the Senior Advisor to the Secretary at the time that one of the panelists had been “actively working to undermine the NRP [National Reading Panel] Report and the RF initiatives.” Lyon further stated, “Chances are that other reviewers can trump any bias on her part.” In a written response to all of the people involved, the former Senior Advisor to the Secretary stated, “We can’t un-invite her. Just make sure she is on a panel with one of our barracuda types.”

The statute envisioned that the expert review panel would be balanced with representatives from the Department and three other named organizations. In fact, virtually all of the subpanels had a majority of Department-nominated panelists. Against this backdrop, the actions of the Director and the former Senior Advisor to the Secretary become particularly problematic.

Additionally, the first element identified in GAO’s Standards for Internal Control in the Federal Government as affecting the control environment is “the integrity and ethical values maintained and demonstrated by management and staff.” The apparent intent of the Reading First Director to include and to give a significant role to panelists who reflected his personal preference in reading programs; his specific encouragement to a panelist who held views similar to his on Reading Recovery; and the intention of the former Senior Advisor to the Secretary to control another panelist raise significant questions about the control environment was being managed.